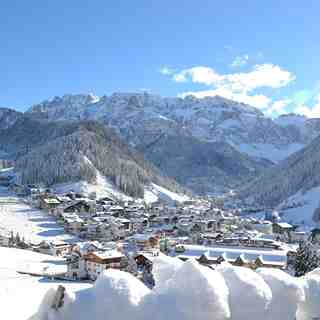 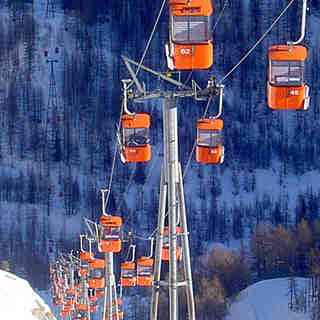 Welcome to the latest roundup of worldwide snow conditions, together with weather prospects for the week ahead from www.snow-forecast.com in association with Iglu Ski who are offering our readers Easter half price chalets on their website.

The severe Atlantic storm system that affected the British Isles on Monday tracked just a little further south than the forecast of 3 days earlier had predicted. As a result, the belt of damaging winds hit southern Britain and Northern France. Of more interest to skiers, the more southerly storm track delivered unsettled conditions to all of the Alps, even places like Isola 2000 in the far south and the Italian Alps. Precipitation was mostly snow above 2000 m but it was accompanied by high winds and often fell as rain with brief warm Foehn winds at lower elevations so that snow melted to mid-stations of many resorts on Wednesday, something we did not foresee a week earlier. The overall affect has been to make snow conditions very variable both within resorts and between resorts. The week ahead eventually sees a major change as pressure builds south from Greenland into the North Atlantic. This favourable pattern will briefly shut off the flow of the mild Atlantic air and replace it with a northerly that will bring a return of snowy winter conditions to the Alpine resorts. It will also help to maintain and improve winter conditions at resorts in Scandinavia and Scotland and the Pyrenees.

Severe winter storms have been making the news in the eastern USA and Canada once again. After a record breaking harsh winter in North America, China, Afghanistan, Iran and Iraq too, it's going to be a struggle trying to convince people in these regions that Global Warming is an urgent problem. Next week should provide Appalachian areas with a brief warm spell but again with some heavy snow along the boundary of the cold continental air – the Ohio River valley looks vulnerable to snow once again.

Spring brings an increasing risk of avalanches and this year the Alpine snowpack has been compromised by unstable frosty layers that built up during those clear February nights. Skioffpiste.co.uk is an excellent web resource that should be bookmarked by anyone who ventures off piste in the Alps.

It has been snowing widely across the Alps for several days, but you needed to work to find good conditions. Although it is two weeks since the warm and settled spell ended, many Alpine resorts have not yet returned to the wonderful top to bottom conditions of early and mid season. Sunny skies and mild temperatures in February stripped a lot of snow from low elevations leaving many resort runs bare at the start of March and although we have since seen a return of moist Atlantic winds, especially since Monday, it has been generally too mild and wet to make much difference below about 2000 m where snow one day would be followed by rain the next. In parts of France on Wednesday, rain fell up to as high as 2200 metres and wet snow fell up to 2500 m. At higher elevations, it has been a very different story with steady snowfalls all week at many resorts, typically with 10 to 20 cm of snow falling from each snow band above 3000 m. Most places have seen at least two of these bands of snow since Monday so there is typically 30–50 cm of fresh snow on the glaciers along the main Alpine divide. Resorts in Italy that did not see new snow the week before also tended to do much better this time. Unfortunately, at the high elevations where heavy snow fell, there has been much too much wind and much too little visibility to describe conditions as anything like ideal. Worse, where it has snowed the avalanche risk is moderate or high and resorts have been reluctant to allow access (whereas lower down the new snow was moist enough to consolidate the snowpack). As we approach another weekend, the weakening westerly weather pattern continues with some snow, some rain, some warm spring sun and freezing levels that will briefly approach 3000 m. A real mixed bag. Next week it looks as if high pressure in the north Atlantic will direct pulses cold air towards the Alps and always keep the mild Atlantic winds away. Low pressure over Western Europe will provide the additional ingredient needed to make it snow. The details are unusually complex because loosing the westerly means that a lot of the weather will develop in-situ (rather like Thursday nights rain and snow over much of the Swiss Alps). It will certainly pay to watch the forecasts closely because there will be quite a bit of variation across the Alpine region but you can probably safely ignore the details if you are planning an Easter trip. Although it is still some way off, we expect that most places will have good conditions by Easter and that the higher resorts in Austria will be best of all. Many lower Alpine resorts should see the return to the quality conditions not seen for six weeks.

Scandinavia has had a great season and most resorts have fresh snow once again. 20 cm fell at Hemsedal on Wednesday and excellent powder skiing can be enjoyed from top to bottom both on and off the pistes. Conditions have improved at Lillehammer following 10 cm of new snow on Thursday morning. The week ahead looks perfect because there will be a good mix of snowfalls, sunshine and persistently low temperatures.

Despite recent snowfalls, Glenshee and Lech both need new snow but elsewhere conditions are pretty good and Glencoe and Nevis Range have a complete cover. Light winds and snow showers now and not much changing until Wednesday when it becomes very cold, snowy and windy once again. Snow should settle to low elevations once a biting northerly sets in.

Bulgarian ski resorts have spring snow conditions and recent light snowfalls only really made a difference at high elevations. Make the most of a brief cold spell with heavy snow in the middle of next week because it will quickly turn back to warm sunshine by the following weekend. Since nobody at snow-forecast has ever skied Bulgaria, we can't possibly comment on the rights and wrongs of the raging debate that seems to have developed on our resort review pages for Bansko and other Bulgarian resorts. Some people plainly detest the place and would never return and others think it is wonderful. It reminds me a lot of reading reviews about Andorra 20 years ago; cheap and cheerful but not necessarily cheap enough to justify what was on offer. Andorra has improved a lot so hopefully Bulgaria will too.

Whistler Blackcomb gets a lot of reviews too, but apart from being very pricey, hardly a negative comment. The weather has been a touch mild of late and the snow rather heavy, but it is colder again now and there is yet another week of heavy snow on the way. Canadian Rockies resorts have stayed colder but snow quantities are much less. Even so, expect light to moderate snowfalls all week at Sunshine.

Thankfully, it has turned cold again around Lake Tahoe. Expect snowy days from Friday until Monday, followed by a sunny week with freezing levels climbing back to the summits. Utah and Colorado still have perfect winter conditions. Thursday and Friday look especially snowy in Colorado resorts so expect a busy weekend on the roads out of Denver. Lighter snow off and on next week too, but with a gradual warming trend that will bring resort elevation temperatures above freezing on Friday.

It has been a remarkably severe winter on the East Coast of the US and Canada – not just along the mountains where there has been great skiing to compensate for a dire season in 2006/07, but also the adjacent low lying areas where snow is less welcome. This has been especially true of the inland side of the Appalachians where disruptive snow and ice storms have occurred in quick succession. At least this area can expect a couple of very mild days next week. Appalachian Ski resorts can look forward to a week of fairly ordinary weather with just enough snow falling to keep conditions fresh. Remaining very cold at the Canadian East Coast ski areas.