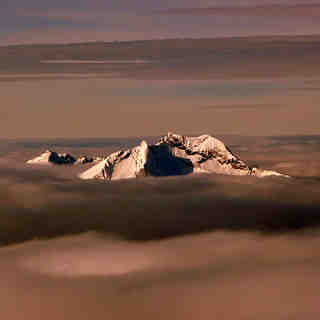 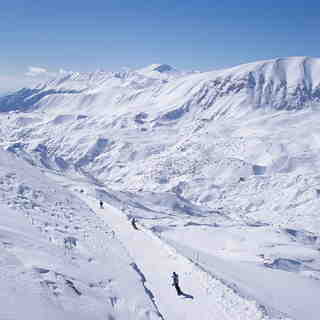 Fresh snow has transformed conditions at many Alpine resorts following the dry and often mild weather that dominated the month of February. Unfortunately, the return of Atlantic weather has been a slow process which has resulted in very patchy conditions. Most resorts in Germany and Austria are vastly improved, plus some resorts in France and Switzerland but relatively few Italian resorts have seen much new snow. If you have frequently checked our forecast updates, it should have been evident that the Alpine weather models have been finely balanced all week, both in the distribution and quantity of predicted fresh snow and a couple of the models were undeniably on the optimistic side. The resort forecasts update every 6 hours and it pays to check that consecutive runs give broadly similar forecasts. Where forecasts differ much from one run to the next, this indicates that confidence is low. In hindsight, you could have done worse than trust last weeks editorial. The northern Alps saw most of the new snow; along with smaller ranges to the north and west, like the Vosges, Jura and Massif Central. If you are hoping to make fresh tracks, new snow is only one of two prerequisites this time because strong westerly winds mean that sheltered east-facing slopes; especially wooded ones; have been loaded at the expense of western slopes that were stripped. At lower altitudes, below about 2300m, the snowpack had formerly melted and has now frozen solid. There is a tremendous difference between having that frozen base buried in deep fresh snow and having it exposed or only thinly covered. On piste, things are much better at any resorts that were able to take advantage of the cold temperatures and apply snow making to the icy bits. Although the wind make it difficult to measure accumulations with certainty, many resorts in the French Alps (in the north at least) have seen 20 to 40cm of fresh snow. In Switzerland, many but not all resorts were similarly blessed (places like Adelboden, Engelberg, Murren, Wengen and Grindelwald) while others towards the Italian border have seen just a dusting. Austria has seen the best of the new snow – 50cm of it at higher resorts like snowsure Kaprun Garmisch in Germany also reported 50cm of fresh snow on Wednesday; almost twice as much as at other nearby German resorts.

The prospects for significant new snow, even at places that missed it last time, are good but the distribution will again favour the north but nowhere in the Italian Alps should miss out. Snow in the central Alps will be heaviest on Sunday and Monday, slowly clearing next week. Very windy again, especially mid week. Feeling bitterly cold on the glaciers if lifts allow access while the wind is strongest. In the far south, places like Isola-2000 and Auron are again too distant from the main weather action. Even so, there should be some new snow by the time you receive this as a localised weather front skirts along the French Mediterranean coast, and unusual event this winter. This front follows a day of severe storms with snow over the Mountains of Corsica on Thursday - this weather slowly dissipating over the Apennines of Italy bringing welcome new snow there. In the Italian Alps, La Thuile and Madonna di Campiglio had 10cm on Tuesday which refreshed the pistes whereas at Canazei and Selva Gardena 20cm of snow was enough to provide perfect powder conditions. Other Italian resorts have not seen significant snowfall for a month and will no doubt appreciate the modest snowfalls headed their way in just a few days.

We may well see a return to spring-like right across the Alps by next weekend as much milder air nudges in from the west.

The Pyrenees are potentially much improved following as much as 50cm of fresh snow on Wednesday that was not forseen in our forecast a week ago. At Cauterets in the west and Font Romeu in the east, on Thursday they reported some of the best snow conditions of the season so far with powder and fresh tracks. Between these, Andorra has had fresh snow too, but strong winds greatly restricted uplift on Thursday. Not a great deal of new snow forecast but nobody will mind until the recent fall has been tracked out. Unfortunately, it will stay quite windy until about Wednesday and it also looks as if rather mild temperatures will arrive once the wind drops

The Sierra Nevada has spring snow conditions. Expect a sunny week with gradually rising freezing levels - reaching about the summits from Tuesday. At least the wind will be light.

Last week, we forecast a Scottish weather pattern that got steadily colder and snowier. This was correct up until Wednesday night when an unforeseen mild and windy spell destroyed some of the recent cover and forced some lifts to close. Thankfully, the mild air has not lasted very long and as of Thursday night we have already begun another trend towards colder and snowier weather as a weather front crosses Britain from the west. An intense Atlantic storm will pass near to or even over Scotland on Monday. The exact path of this system is still uncertain, but there is a fair chance that the Scottish Highlands will see severe gales and blizzards. If the worst of the weather is not here, it is very probable that it will not be any further away than Northern England, Ireland and North Wales. It seems inevitable that this system, probably the most intense of the winter, will cause some travel disruption in Britain early next week as a result of damaging winds. Just as last week produced a day or two when there was sufficient snow for skiing on the northerly aspects of Snowdonia and Ireland, we expect further showery snowfalls for the mountains of western England and Wales early next week from the polar air that follows in the wake of this storm.

Scandinavia continues to have a great season. Last week, the most snow fell at Oppdal where they received 50cm while Voss received 20cm on Thursday. Although resorts in Sweden didn't see as much, they did receive continuous dustings. Expect more of the same with further snowfalls in the week ahead, heaviest at the weekend.

Resorts in Bulgaria have spring snow conditions. Some snow about on Thursday night and a windy day to follow on Friday; otherwise mostly good skiing weather. Monday and Tuesday should see fresh snowfalls, but these will be fairly modest and only really improve snow conditions above about 1500m since it will be warm enough for rain rather than snow at lower elevations. Stay high for good skiing this week.

Lebanon and Israel will see some clouds over the weekend. Otherwise, remaining settled with sunny weather, light winds and spring snow conditions. Less mild in the middle of the week but even then, the snow soon softening in the morning sun.

Whistler Blackcomb can look forward to another snowy week. The La NiÃ±a pattern pretty much guaranteed a good season in the Pacific Northwest and the Rockies and so it goes on. Surprisingly, season snowfall totals to March 1st are not all that much better than the undeniably impressive historical averages: 781cm of snow this season versus an average of 733cm. The last strong La NiÃ±a was in 1998-9. By the end of it, Mount Baker had seen 29m (95ft) of snow fall. That record looks like it will need a stronger La NiÃ±a than the present one if it is ever to be broken. Watch out for a big fresh fall here on Monday and Tuesday, possibly preceded by rain.

After a mostly mild and sunny week, expect more of the same spring weather from Tahoe south.

Utah and Colorado are still reporting a cold winter pattern maintaining excellent alpine skiing conditions. Many resorts have received fresh snow. Big Sky in Montana has had constant snowfall this week providing powder skiing every day. Staying cold here for the next week or more, with reliable snow showers keeping conditions fresh. These will merge together to give longer spells of snow from Wednesday onwards. A fairly similar pattern at Colorado resorts like Vail, but with a additional period of steady snow through this weekend.

Last time we mentioned cold and snowy weather returning on Wednesday night and that is just what has happened. Snow that began falling Thursday afternoon in northwest Arkansas marked the start of a major winter weather event for the state. A foot or more of snow was forecast to fall in some area but the good news is that freezing rain is not expected because the precipitation is falling through very dry air. This rapidly cools through evaporation and rain quickly turns to snow. As this weather system moves northwest, we expect a major snow event that will track right along the Appalachians and into Canada. As usual, the source of this major east coast snow event is a combination of freeing cold continental air over the eastern US and a pool of warm and moist air moving out of the Gulf of Mexico. Following a week when snowfall made the headlines somewhere in the Eastern States and Eastern Canada every day, expect another major storm and more headlines about travel disruption and collapsing roofs. As usual, the only folk who won't be complaining will be the skiers who are enjoying a bumper winter.