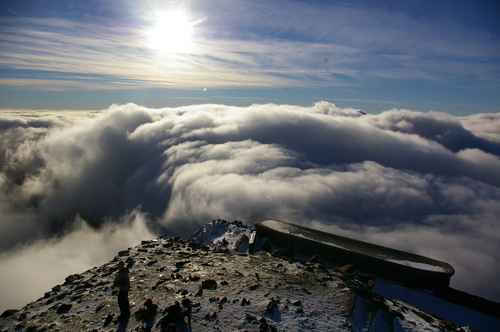 The Snowdon resort guide summary is: Snowdon has 0 lifts within its terrain that is suitable for intermediate level. Find location, trail maps and piste maps covering the mountains 762m of vertical range and surrounding area.

The Snowdon resort guide summary is: Snowdon has 0 lifts within its terrain that is suitable for intermediate level. Find location, trail maps and piste maps covering the mountains 762m of vertical range and surrounding area.

Helpful resort information to assist planning your trip to Snowdon.

The terrain at Snowdon includes:

Snowdon, in Wales, is only here because it is the highest point in England and Wales. It's not really a skiers mountain because it is mostly too rugged and too coastal to hold much snow for very long. Other nearby mountains to Snowdon are much better suited to back country skiing and snowboarding after there has been at least 18 inches of snow to cover the smaller rocks and tussocks. The Glyders,the Carnedd range and Moel Siabod all offer interesting descents of 500m to 750m of vertical after are good dump of snow, primarily where deep snow accumulates in sheltered gulleys. Unfortunately, good conditions have become rather infrequent over the last 20 years so don't expect more than a handful of skiing days in an average winter at Snowdon. That said, when the snow is good, and that can be any time between November and April, skiing in Snowdonia has the steep terrain to make it really worthwhile. The nearest airport to Snowdon is at Manchester and the nearest train station is at Bangor.

Latest photos from Snowdon. View all photos at the Snowdon gallery page.

Interactive Snowdon trail map and piste map. View the piste and trails as well as the surrounding terrain and mountain contours for backcountry action. Find and compare nearby resorts by clicking on the resort markers.

MarchAverage: 2.6 snow days per week
The snowiest week in Snowdon is week 1 of March. There are typically 2.6 snowy days during this week with 10 cm of snowfall. Check out the Snowdon Snow History graphs below.

A summary of the current snow conditions in Snowdon. View more information on the Snowdon detailed snow report page.

There is some amazing backcountry skiing here when big dumps occur, Carneddau is where it's at.

Read 3 more reviews of Snowdon or submit your own

Discover ski resorts near Snowdon. Click below to view there ski resort guides.