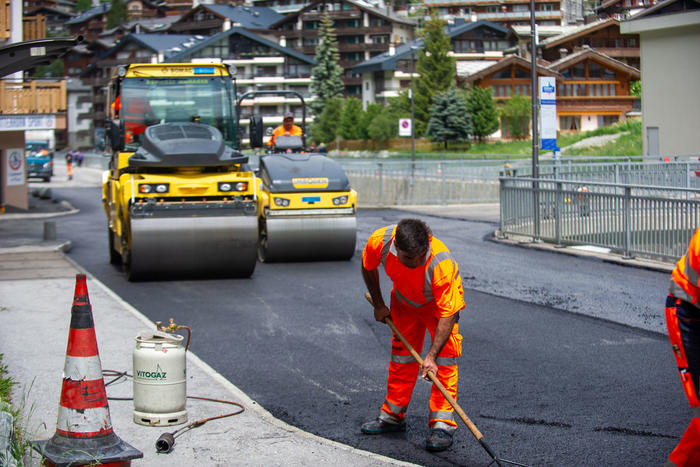 The famous Swiss ski resort of Zermatt, one of only two in the world that endeavours to offer snowsports every day of the year, has taken an unusual step in its long line of initiatives on the environment and the fight against climate change.

Working with the award-winning Scottish firm MacRebur, the resort integrated the type of waste plastic that could not be recycled and would otherwise have gone to incineration or landfill to be used in the asphalt when they were resurfacing a road in the resort last month.

This new road surface was laid in a pilot project in June 2019 and the amount of plastic in the tarmac was small at 0.3%.

However someone did the maths and calculated that if Switzerland alone used this mix in its annual resurfacing work some 16,000 tonnes of non-recyclable plastic could go in to on the road surfaces rather than landfill or incineration.

Zermatt report that putting plastic in tarmac should actually work out better for them than not doping so.

“For Zermatt, where temperatures fluctuate from between -20 to +30 degrees, depending on the season, this new tarmac is ideal. Thanks to the inclusion of plastic, it is more flexible and therefore more durable,” a resort spokesperson said.

Every year more than 400 million tonnes of waste plastic are being produced worldwide. Adding up to 8.3 billion tonnes between 1950 and 2015.

For the environment, the usage of plastic in the road surface presents no problem as the particles are coated by a binding agent and therefore don’t contaminate the environment.

Zermatt is a famously car-free resort and has made hundreds of environmental initiatives over recent decades including large solar power facilities on its Klein Matterhorn installations – the highest ski slopes in Europe.