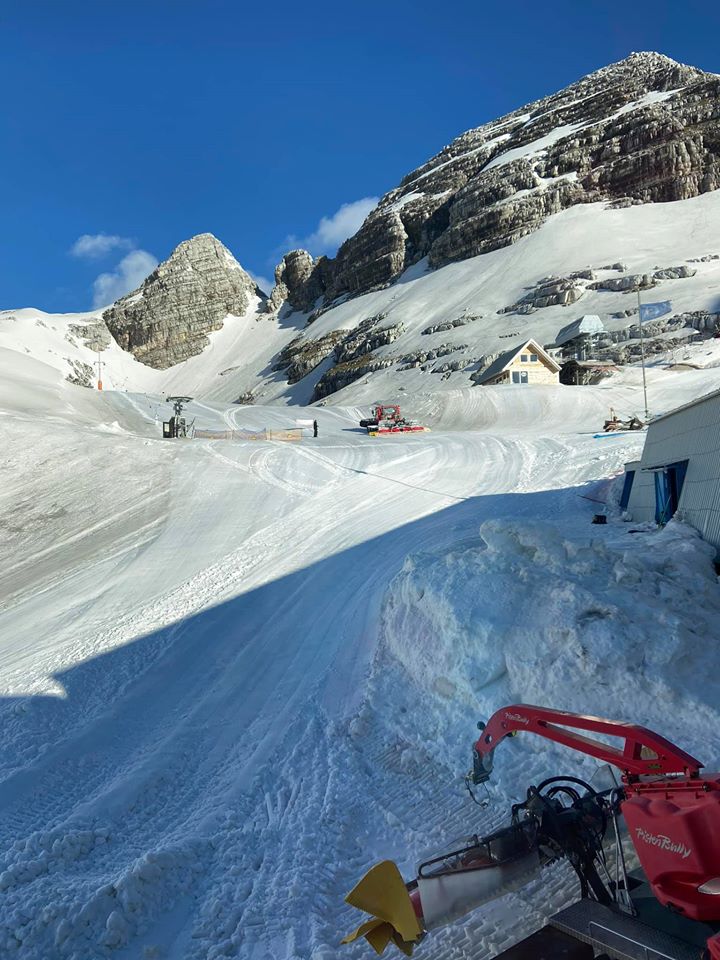 Several ski areas in Slovenia have re-opened after the country’s latest lockdown restrictions were eased.

The country is now back to a tiered system, with the highest ‘red level’ now in force.

However ski areas are allowed to re-open and three have chosen to do so despite the natural ends of the season being near.

Two of there, Krvavec and Kanin, say they intend to stay open to at least early May.

Kanin ski area (pictured in May last year) was actually one of the first areas in Europe to re-open last spring after the first lockdown.

It re-opening due to good conditions up high from 14th May, 2020 and the Slovenian national squad were training there and organised the first national competitions anywhere since lockdown began. The centre closed again on 31st May 2020.

Slovenia had a very stop-start season, the start of which was initially delayed by warm weather rather than pandemic restrictions in December following a warm and dry November.

Despite calls from France, Germany and Italy for all European ski areas to remain closed, Kranjska Gora opened first on Thursday 10th December followed by Pohorje and Krvavec on Saturday 12th. Only locals were allowed in resort with apres ski banned.

Shortly before Christmas the government shut down ski areas until 1st January and fined one stayed open, Krvavec, 4,400 euros.

This closure was then extended. Kope was the last are open in the country, to January 8th, but reported it had to shut down then due to government restrictions.

Ski resorts were then allowed to re-open for skiers only in most areas of the country under a new-tiered system from 23rd January. The majority remained open through February and into March but on 1st April a new short lockdown was announced, which closed them once more, until this latest easing of restrictions.