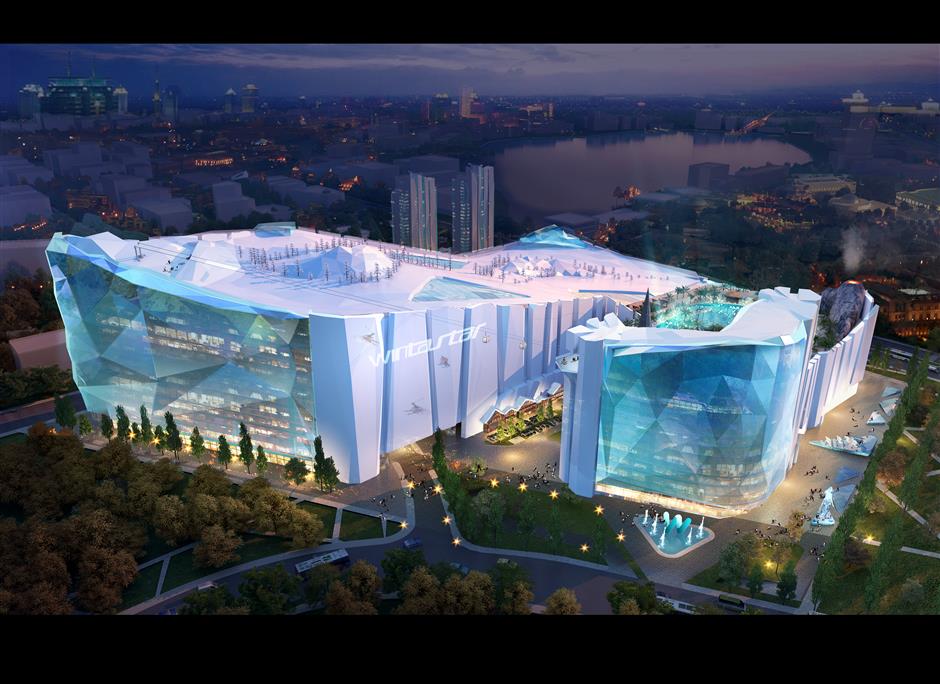 Reports from China, where the focus is on in imminent Winter Olympics and Paralympics around capital Beijing, indicate that a new “world’s largest indoor snow centre”, including an indoor Olympic standard ski run, will be completed in the country’s second city, Shanghai, before the end of 2022.

Now known as WintaStar Shanghai, the spectacular project was first unveiled as Winterland Shanghai in 2015 with a price tag of 13.5 billion yuan ($2.1 billion).

Located in the coastal Lingang area it is currently being billed as “the world’s largest integrated indoor ski resort.” This follows claims at its launch announcement that it would contain, ”the world’s longest indoor ski trail.”

The detailed stats on the snow area are not yet known but the developers, however Singapore-based KOP Properties, say Wintastar’s indoor ski and snow park will span 90,000 sqm and feature a combination of three ski slopes of varying gradients including a slope of Olympics standard for training as well as over 25 snow play attractions for non-skiers.

Currently the three largest indoor ski areas in the world by snow are all In China, are all operated by the Sunac Group and have all opened in the last five years. The biggest Sunac Snow World at Harbin in the northeast of the country covers 72,600 square metres. The world’s current longest slopes however, at a little over 600 metres, are in France and Germany.

Another complex that announced it would include a one-kilometre long indoor snow centre, Meydan One in Dubai (above), appears to be stalled, or at least delayed and there are indications the slope will not now be that long, although still longer than the French and German slopes.

Ground-breaking on WintaStar Shanghai, originally planned to open in 2019, took place in 2018 (above) and along with the snow area the building will feature residential property, restaurants, accommodation and a shopping mall.

The development also includes a 28,000 sqm Viking-themed water park which, “promises twists, inversions and record-setting waterslides presented over two levels,” to deliver the best, interactive, overall water-play experience for thrill-seekers and families throughout the year.”

There will also be a tree-lined hiking trail and a “beach club” – an arena resembling a beach – at 100m above ground, the company’s Chairman Ong Chih Ching told The Straits Times in 2015.

Indoor skiing is not new to Shanghai, the city was home to one of China’s first and among the world’s largest centres, LongZhu Hokkaido Shanghai Dashung Indoor Snow (also known as Yinqixing / Xinzhuang Indoor Skiing Site), between December 2002 and September 2009.

Located in Xinzhuang, it had three slopes of up to 150 metres in length and a combined length of 380 metres, could cope with 2,000 people a day and was one of the world’s largest ski centres, as well as the largest in China and Eastern Asia, for most of the first decade of this century. It was reported to be popular with the city’s ex-pat community especially when summer temperatures passed 100F. However it closed “for refurbishment” in 2009 but has not re-opened.

Shanghai is rated the world’s third most populated city depended on the measuring system with between 24 and 28 million residents.