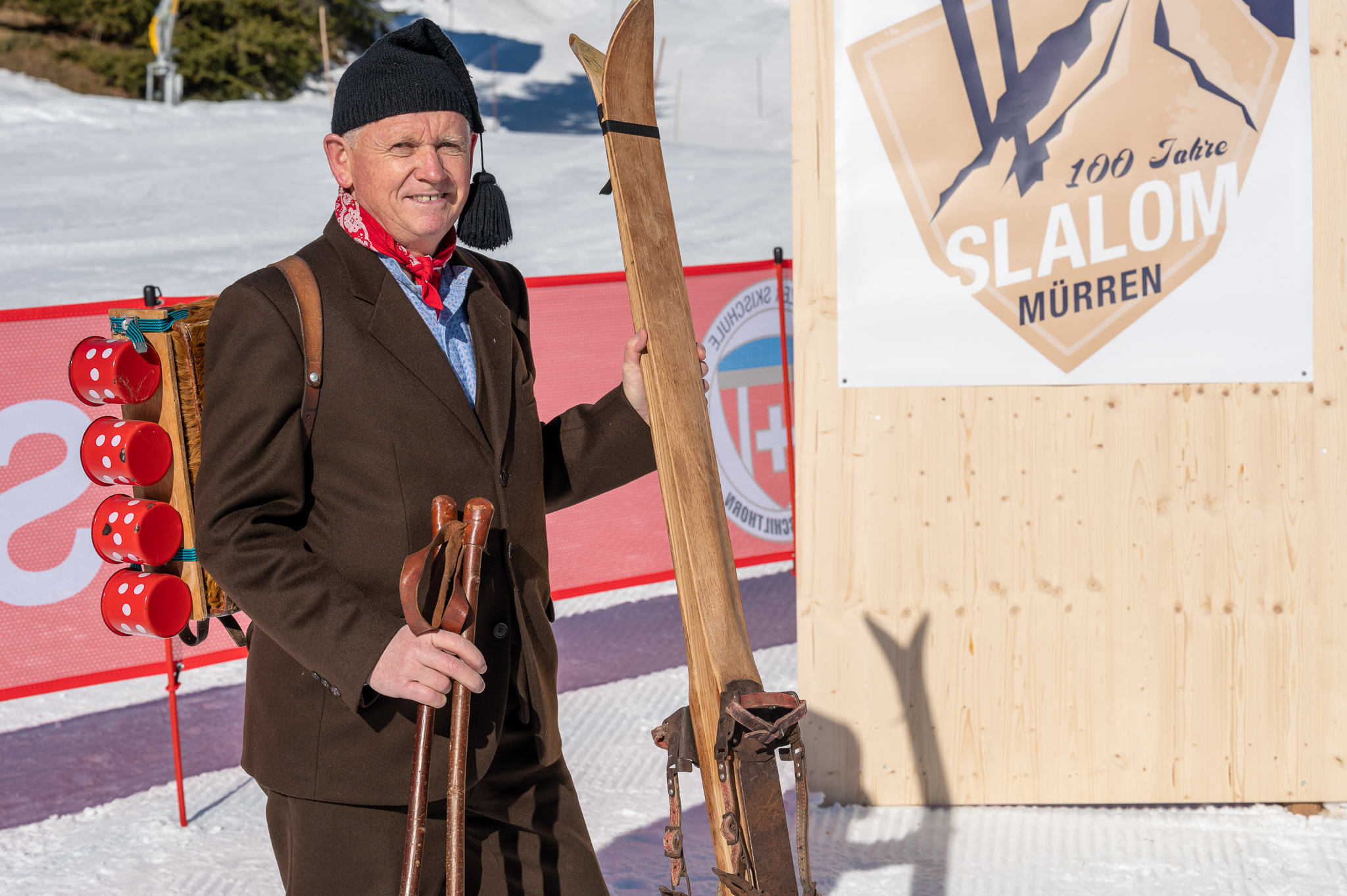 The famous Swiss ski resort of Mürren is celebrating the centenary of the first ever modern slalom race this week.

The anniversary itself is this Friday, January 21st but the celebrations began on Monday 17th January with William Lunn (great grandson of Sir Arnold Lunn who set the first ever race) and Swiss slalom queen Erika Hess (41 world titles) unveiled a tribute to Arnold.

Ski racing pioneer Arnold Lunn set the course for, “a turning race around flags on the practice slope” at Mürren in the Bernese Oberland’s spectacular Jungfrau region on January 21st, 1922.

It was the first time that a race was decided on time alone, over two runs with no marks for style, it marked a decisive break from previous style tests. It was the first modern slalom.

William Lunn and Erika Hess unveiled a memorial rock in tribute to Arnold on the original practice slope beside the Allmendhubel funicular (which opened 1912). A crowd of more than 100 gathered for the event, including Mr Bill Longhurst, Britain’s deputy ambassador in Bern; members of the Lunn family and the Kandahar Ski Club which Arnold Lunn founded in Mürren in 1924 to promote the new sport; and representatives of Lunn’s key allies in Austria and Switzerland, the Arlberg Ski Club and the Swiss Academic Ski Club.

William Lunn quoted his great grandfather’s explanation of the concept of the slalom – “The object of a turn is to get round a given obstacle losing as little speed as possible, therefore, a fast ugly turn is better than a slow pretty turn” – and commended his determined campaign for the acceptance of Alpine racing, despite opposition from Scandinavian skiers who considered the British too cowardly to jump and too weak to langlauf.

He also paid tribute to the village and people of Mürren for hosting this event and for their warm welcome and support down the generations. Erika Hess expressed her delight at visiting Mürren for the first time, and described slalom as ‘the starting point for all racers and the most beautiful discipline.’

Apologies for absence and messages of congratulation came from all over the ski racing world, including salutations from slalom legend Ingemar Stenmark and current World Cup slalom stars and Kandahar members Dave Ryding and Daniel Yule, who came second in Sunday’s Lauberhorn World Cup Slalom at Wengen.

“I looked at Mürren from the opposite side of the valley when I was a ski racer and wanted to go there. I wish you all a nice celebration!” said Ingemar Stenmark.

“Without the slalom my life in skiing would not have been,” wrote Ryding, “I send my warmest wishes to the people of Mürren, the Lunn family and my fellow Kandahar members for the 100th Birthday of Slalom skiing.”

After the formalities, Christoph Egger, CEO Schilthornbahn AG, led a ceremonial re-enactment of the slalom on the original slope, followed by Erika Hess and many onlookers, with period costume, equipment and technique on display.

Mürren is proud of its place in history as the cradle of Alpine racing and maintains the tradition. The slalom commemoration marked the start of the village’s annual Inferno racing week, which reaches a climax on Saturday with the 78th Inferno downhill.

The Inferno was inaugurated in January 1928 by 17 Kandahar members, including Arnold Lunn, over a marathon downhill course from the Schilthorn (2970m) to Lauterbrunnen (800m).  1850 amateur ski racers make the annual pilgrimage to Mürren to take part in the world’s longest downhill race.

The original race on 21 January 1922 saw a Canadian teenager, an Australian-born veteran of 4 years in the First World War trenches, Dame Katharine Furse (aged 46), and an Englishman, J A Joannides, contested the first slalom race on the slopes beside the Allmendhubel funicular.

Joannides won the Alpine Ski Challenge Cup with an aggregate time of two minutes for the two runs – the first on hard snow, the second on soft. It was the first example of the technical discipline that tests controlled turning at speed.

Lunn published the first set of rules for slalom races later in 1922 (including ‘the skier who wilfully uses his ski as a toboggan shall be disqualified’). The rules went through many changes, with time penalties for falls, kick turns or dislodging the oranges which Lunn placed on the flagpoles. The soft-snow slalom soon proved impractical, but the slalom’s two-part format continues today.

Lunn founded the world’s first Alpine ski racing club, the Kandahar, at Mürren in 1924, and the village was his headquarters for a campaign to gain wider international recognition for the new sport of Alpine (downhill) ski racing.

His efforts were initially resisted by the Nordic-dominated International Ski Federation which considered langlauf and jumping the only worthwhile forms of competitive skiing. But Walter Amstutz’s Swiss Academic Ski Club and Hannes Schneider of the Arlberg Ski Club lent influential support to Lunn’s cause, and in 1930 the FIS invited him to organise the first World Championships of Alpine skiing at Mürren.

Downhill and slalom racing made their Olympic debut at Garmisch Partenkirchen in 1936, where Arnold Lunn’s son Peter captained the British team.