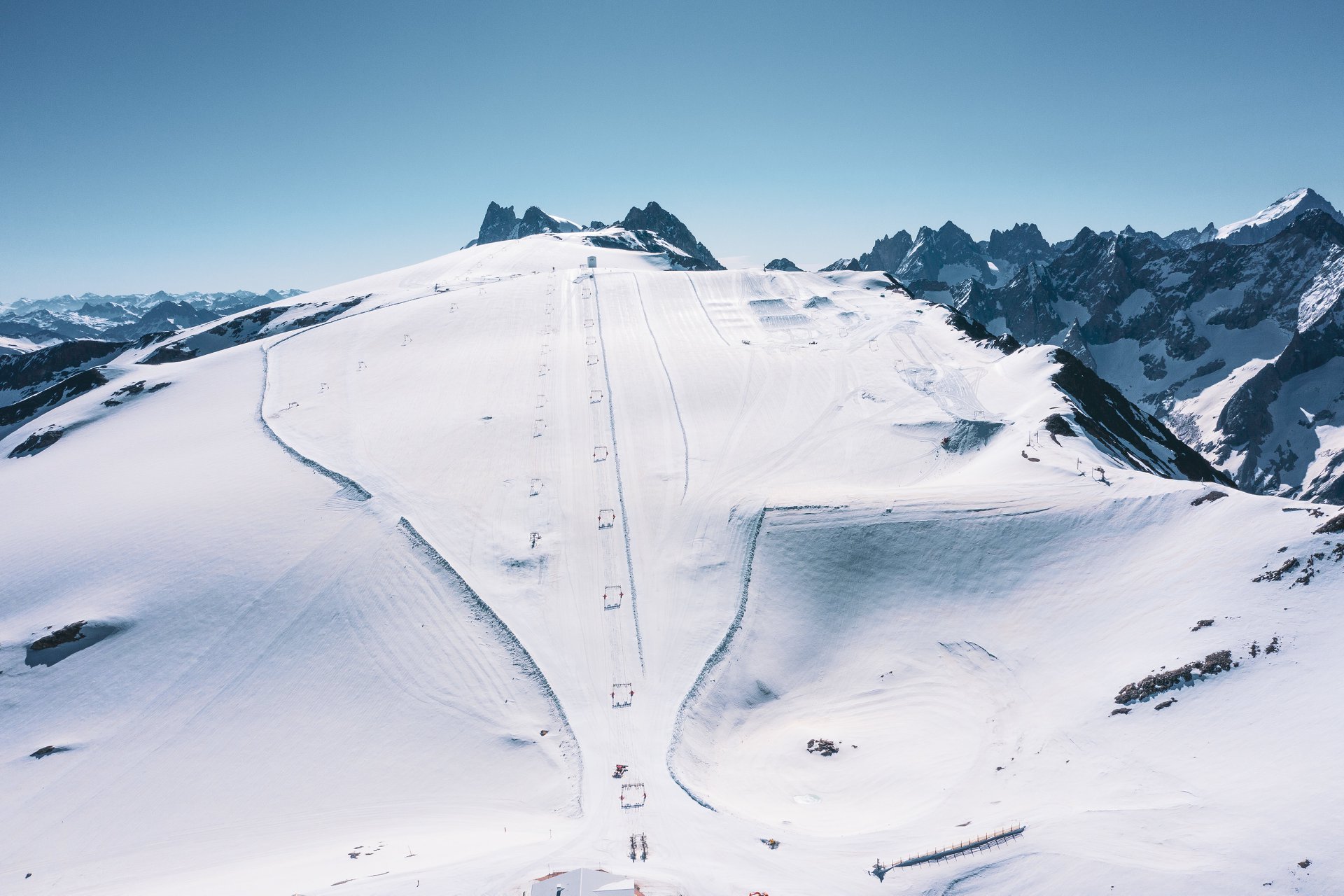 French ski areas have been allowed to resume carrying passengers in ski lifts and, barring any last minute changes, the first of the country’s three remaining summerski resorts, Les 2 Alpes (pictured above last summer), will resume offering lift-accessed skiing from Saturday, May 29th.

“If you feel frustrated about having missed your winter ski holiday, why not try a summer ski holiday?” a Les 2 Alpes spokesperson asked, adding, “and, after a winter of heavy snowfall, the glacier will be in excellent condition for visitors this summer.”

Travel within the EU is resuming although unfortunately so far leisure travel is not possible from the UK.

Les 2 Alpes claims Europe’s biggest skiable glacier – skiers and snowboarders can ride every morning from 7am to 12.30pm on 30km of slopes located between 3,200m and 3,600m.

The glacier is accessible to all ability levels: there is a beginners area, there are many runs for intermediate and advanced riders, and pro riders come in the summer to train in alpine skiing and freestyle in the snowpark.

The Pisaillas glacier, reached via the road up the Col de l’Iseran above Val d’Isere will be the next French glacier ski area to open to skiers, a fortnight later, for four weeks from June 12th to July 11th. The highest point of the slopes here is 3,300m and there are a total of six pistes, three of which are open to the public, while the other three are reserved for sports team in training. Ticket sales are limited to 600 a day and interested skiers are advised to book in advance.

Tignes will be the third and final area to open, another week later on June 19th. It plans to operate a six week summer ski season to August 1st. Tignes was the only French area that has already started its 20-21 season last autumn when the second French lockdown began.

French ski resorts were able to open to tourists during the winter ski season but not to allow lifts to operate.  Ski touring and cross-country skiing and reported to have boomed as a result. Skiers were also towed uphill by horses and snowmobiles, or taken to the top of ski runs on taxis where roads existed. Les 2 Alpes was among resorts which groomed several runs for ski tourers to ski down if they wishes after hiking up.

By contrast over in Austria ski lifts were abler to operate but tourism (hotels and resort tourism infrastructure) were closed.

It remains unclear as yet whether closing ski lifts had a big impact on the spread of the pandemic in France. Ski areas pointed to the fact that they had pandemic spread prevention measures in place and appeared to operate safely during the bumper 2020 summer season.

Swiss ski resorts and lifts that did operate through the winter over the border say they proved you could operate safely without causing pandemic spread. The authorities there took a similar line of North America where resorts stayed open when cases were found but areas of infection spikes like individual hotels were isolated.