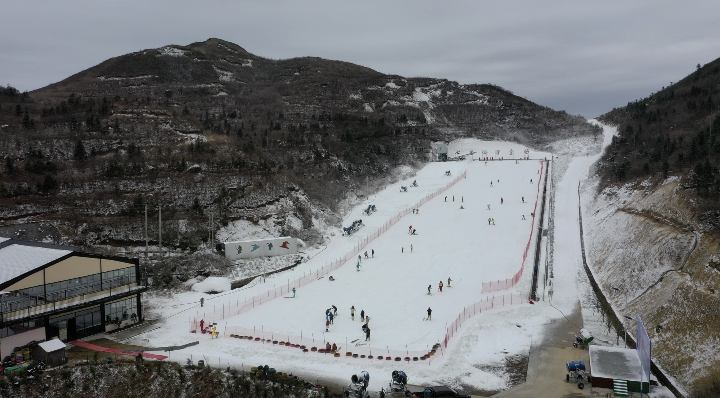 The Chinese government has begun publishing a series of ski-themed articles through its Xinhua state-run press agency in the run up to the 2022 Winter Olympics there, less than a year away.

China has grown from having just a handful of small ski areas in the 1990s to more than 700 centres now.  By some measures this is the most of any one country in the world, although most are small centres with just one or two short surface lifts.

The articles highlight how ski area developments have turned lives around in remote corners of the country.  They each talk about the economic benefits of developing ski areas, as well as skiing bringing physical and mental well-being to local people.  The reports also suggest people living in poor areas where winter was something to be endured now look forward to actually having some fun in the snow.

All of the reports so far have been focussed on individuals and their ski dreams. The latest reports on a man called Xie Zhiping who spearheaded the construction of Qixingling Ski Resort (pictured top and below) in east China’s Jiangxi Province, which is known for its year round warmth, not snow. Xie was not deterred though and overcame doubts with the support of the local communist party and raised nearly 20 million yuan (3.1 million U.S. dollars) from a communal funding effort.

“A few months before the trial operation in 2017, I lived in the mountains all day long. Frankly speaking, I was under huge pressure because I did not want my fellow villagers to lose money,” said the 45-year-old.

His efforts paid off in 2017 when a 26,000-square-metre ski area opened. In the 2018-19 ski season it operated for 78-days, attracting 61,600 tourists and achieved an operating income of 12.2 million yuan (1.89 million U.S. dollars), employing 50 villagers directly or in related ventures like mountain restaurants.

“Because of the promotion of ice and snow sports, we have more job opportunities now,” on ski instructor employed at the centre said, adding that in the past five years, he witnessed the changes of skiers from experiencing the sport to advancing their skills.

Another media story tells the tales of Zhe Liancheng, who we are told is a ski enthusiast living at the foot of Liupan Mountain in Jingyuan County of Ningxia Hui Autonomous Region.

Ningxia’s Xihaigu area until recently had the unfortunate label of the “the most unfit settlement for humans” with poverty caused by frequent draughts and the terrible ecological environment is deeply entrenched in the memory of locals like Zhe, born before the 1980s.

But with an improving environment, Xinhua tells us, 11 ski fields, built in plateau, desert and city areas, have enabled “ordinary citizens” to learn and enjoy winter sports. With a population of no more than seven million, the annual number of people who engage in winter sports across Ningxia has exceeded 500,000 skier days.

“I used to stay at home the whole winter, but now I like to enjoy the charm of winter and make new friends skiing,” Zhao Ling, 58, a ski lover from Ningxia’s capital Yinchuan, tells Xinhua, adding, “I love the feeling of chatting and skiing with fellow skiers, especially the young. They are more energetic and I feel like I am becoming young again too.”

In 2018 the Chinese government announced the target that 300 million people try ‘ice and snow sports’ by the time of the Olympics and during the 2020-21 winter season, China is expected to have 230 million ice and snow tourists, Xinhua reports, so they’re getting there. Ski tourism revenue this winter is expected to be 390 billion yuan (60.37 billion U.S. dollars), according to a report released by the China Tourism Academy in January.