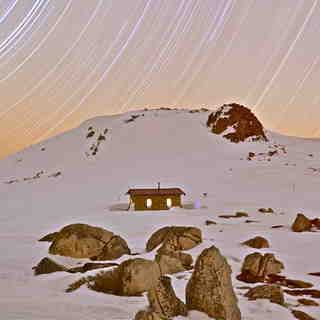 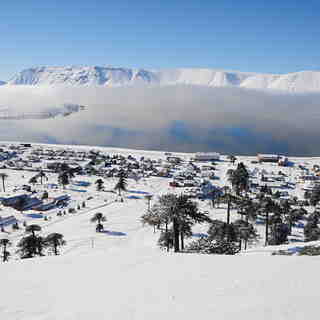 This weekly editorial is sent to all current members of snow-forecast.com. Even after your membership has expired, you can still view current and archived editorials at http://snow-forecast.blogspot.com/  Our sponsor this week is Direct Travel Insurance - click here to check out their offpiste winter sports cover from only £15

Today’s editorial is a day earlier than usual. I will be perfectly honest about the reason - Early season conditions in Austria are currently so good that Rob, our trusty editor, has decided that he needs a break and can't wait until tomorrow. He was last seen heading out of the door with a snowboard, a very long ruler and a laptop, muttering something about needing to check if our Alpine forecasts have been sufficiently accurate. Given the conditions, I am sure he is not the only one making a flimsy excuse for taking a long weekend. Here is what he wrote before he dashed off to go "calibrating" - it looked like he was in a hurry and I can't help noticing that it's a bit briefer than usual, and what on Earth happened to Scandinavia? Nick (today’s editor).

With a blocking high over Western Europe for most of the Autumn, slopes in the Pyrenees, Sierra Nevada and Western Alps have mostly missed out on any early snowfalls. A week ago I mentioned the prospect of things improving about now as an easterly flow develops over the top of a developing Mediterranean low. The weather has more or less cooperated, but unfortunately the flow is more Northeast than East and coming off the continent, drier than expected. We can expect low temperatures and only a dusting of snow over the weekend with the heaviest snow falling instead on the high mountains of Corsica. Early next week, we do expect a northerly flow over the Pyrenees to deliver light snowfalls over a wide area and by Wednesday, falling pressure promises to bring the first substantial snowfall of the season although once again there is some uncertainty because this is highly dependent on high pressure retreating far enough into the . Atlantic

There were very impressive snowfalls over Austria last week and accompanying low temperatures mean that most Austrian resorts are now in full winter conditions. It's about -15 degrees C at 3000m today. Langem am Arlberg had 112cm (44inches) of snow over 48hrs with winds reported to have peaked over 100mph (160km/h) here - strong enough to cause some damage. Nearby parts of Germany have also benefited from the snowfalls - Garmisch is open. At long last some of that snow has spread further west into the Swiss and French resorts. Nothing like as much snow has fallen here though things are improving right now. With this storm accompanied by drifting snow and following so quickly after a previous ones, it is difficult to say how much fresh snow actually fell - something like 50cm to 1m seems representative of most of Austria, heaviest in Salzburgerland where there are exceptional reports of 1.5m of snow and snow there is still falling. At Kaprun, it is now possible to ski down to Langwieboden. The Austrian Tirol has generally seen about 50cm of fresh snow too. The problem with so much snow being accompanied by severe gales is that it has caused avalanche problems. The risk was so high that the road to Lech and Zurs was closed earlier in the week - the earliest time in the season that this has happened since 1974. Although it has been widely reported that this storm was a once in 30 years event, few commentators seem to have traced its origins right back to the remains of Hurricane Noel feeding warm and moist air into an arctic depression.

With low pressure slowly crossing central Italy form west to east over the weekend, an easterly wind will maintain low temperatures over the Alps Snowfalls will slowly clear from the west over the weekend, with the prospect of especially good skiing on all of the Austrian glaciers once visibility lifts. Also very good at and any lower elevation resorts like Schladming that choose to open at the weekend. As the Alps lose the heavy snow, it will turn increasingly wintry over the Apennines of Italy. There is already a good base at many resorts - all of which are little known outside Italy and few visitors to Rome realise that there is such great skiing close at hand.

A lot of our users are no doubt wondering if and when the French and Swiss Alps are going to see a decent fall of snow. Before you contemplate changing your Christmas destination to Austria, don't panic - these areas are not entirely missing out. The good news is that there are moderate snowfalls and low temperatures from about Risoul north - that's pretty much everywhere apart from the Maritime Alps of France and Italy. 10-20cm of snow will be typical for the French and Swiss Alps with snow falling right down into the valleys. Because of the nature of the cloud profile, snowfalls will likely be heaviest at about 2000m with lighter snow on the glaciers. Clouds clearing away on Saturday morning to give a fine weekend with much lighter winds. Turning unsettled and increasingly snowy by the middle of next week.

East of Austria, it has also been a cold and snowy week - especially over the Czech Republic. We expect very heavy snow over the Balkans adding to what has already accumulated last week. A brief mild spell over Bulgaria will give way to heavy snow there at the weekend.

The northerly storm surge that threatened flooding along the North Sea coast last week was accompanied by heavy drifting snow of Eastern Scotland. Milder westerly winds melted much of it and the slopes at the Lecht were soon back to grass and heather. The nearby Cairngorms were just high enough for some of the snow to survive on higher runs. A return to cool and showery northerlies is currently bringing further snow about the tops. These will die out and it will turn a little warmer again before another snowy northerly sets in on Saturday night with snow to 700m on Sunday and again on Thursday. Hopefully, high pressure will stay to the west but there are tentative signs that the weather pattern that has dominated for two months may break down in a week or so allowing milder SW winds.

It's mild over the Appalachians but a cold northerly will spread down from the Great Lakes during Thursday with heavy rain turning to snow as temperatures plummet 25F. Cold and settled weather to follow will provide a good chance for snow-making to supplement the natural stuff.

A once in 30 years storm in Austria would not impress the folks at Whistler where they are used to this kind of thing and are already boasting a 108cm base - the area opens for skiing in just seven days. A storm on Wednesday night should dump 50cm of snow at the top of the mountain but it is just about mild enough for rain and sleet rather than snow down in the resort. This is typical La Niña weather - coastal BC tends to see the very heaviest snow, but brief mild spells can make it slushy or icy low down at times, especially early season. The further inland you go, the lighter the precipitation but there is no risk of rain. To some extent, the lower temperatures mean that the powder falls with a much higher air to ice ratio, so they get big dumps anyway. In short, wherever you go, BC looks like a very safe bet this season with frequent fresh snowfalls. Some of these will also extend to the more northern resorts of the American Rockies  - places where great ski seasons are the norm. This next system should sweep heavy snow across the Tetons of Wyoming on Sunday - that's good news for places like Jackson Hole where they currently have just 30cm of snow and would like to see more before they open on December 1st. A settled spell in prospect across the rest of the Rockies

Unfortunately all this weather is happening too far north for the popular Tahoe area of California where we expect another mostly dry week. At least we should lose the exceptionally warm temperatures on Monday but this is too late to save much of the snow that fell last weekend. As previously noted, La Niña years tend to have late starts in Northern California, but by mid January snow arrives and afterwards La Niña years are not so different to other years. South California and other Southern states tend not to recover so well at all and the mountains near Los Angeles tend to really struggle.