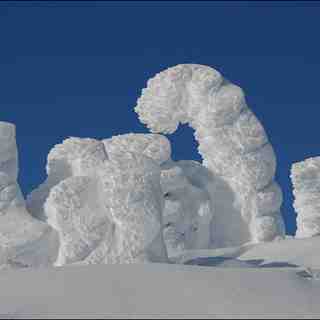 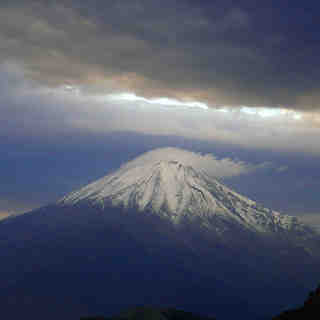 Welcome to the latest summary of snow conditions around the World , together with prospects for the week ahead. Sea surface temperatures in the Pacific show that a strengthening La Niña threatens to exert a big influence on global weather patterns over the coming months - with a peak effect expected in January 2008. There are implications for the ski season ahead. La Niña occurs when the tropical seas of the Pacific off the coast of Latin America are anomalously cool, while the waters become warmer towards Australia, the Philippines and Indonesia. Unlike El Niño, La Niña events tend to be rather brief - lasting only a year. By far the strongest effects are felt in the Pacific Basin, but meteorologists are increasingly confident that "tele-connection" between weather systems can manifest itself around the globe; for example, La Niña has already been implicated in Britain's dismal summer as well as the African floods. Previous La Niña events have tended to cause very dry conditions in the SW United States. We are not expecting a great ski season in Southern California or Arizona where there is already a chronic drought.

In marked contrast, the Pacific NW should see more frequent and heavier snow storms than usual - Washington State tends to do exceptionally well but there are usually better than average snow seasons as far away as Banff and Revelstoke in the East, and Valdez in Alaska to the north. Surprisingly, Whistler hasn't done nearly so well out of recent La Niñas than it did during the ones on the 1970's - due to warmer temperatures leading to more rain rather than more at low coastal locations. Neither La Niña or El Niño have been proven to have much effect on snowfall at California's Lake Tahoe, Utah or Colorado apart from perhaps a slower than usual start to the seasons around Tahoe - be cautious if you plan to ski there before January. Across the continent, La Niña tends to bring ier than normal winters to the higher resorts in Vermont - places like Stowe - but doesn't seem to make much difference elsewhere in the East. In New Zealand, La Niña usually heralds an early spring and this year seem to be no exception. Through intangible tele-connections, it usually has a similar early spring effect in NW Europe, but this region is much more profoundly affected by something much closer - the North Atlantic Oscillation (NAO). More on the forecast state of the NAO and what that means for Alpine prospects another time.

Three days ago our computers automatically dispatched so many 72hr snow alerts, for so many European resorts, that we had to double check in case something had gone badly wrong. As I write this editorial at lunchtime on Thursday, 72 hours later, it is ing right across the Alps down to 1500m. There are already widespread reports of 10-30cm of fresh snow at the glacier resorts and the webcams show that whiteout conditions are widespread. In short, we have near winter conditions. Unlike the previous cold plunges, this one is further West and so it is the Swiss, French and Italian Alps that will see the lowest temperatures and heaviest over the next couple of days. This cold blast extends across the Massif Central and into the a href="http://www.snow-forecast.com/maps/pyrenees">Pyrenees and it should briefly be cold enough to bring fall to the ~1500m tops of the Jura, Vosges and Black Forest too. Yesterday, the same airmass affected the Scottish Highlands, once again bringing blizzard conditions with 60km/h winds and temperatures of -3C on the summits and widespread frost to rural Britain. Some great conditions for skiers heading up to the Alpine glaciers as the weather clears away in a day or two. After that, freezing levels will return to their seasonal levels of about 3500m. By Wednesday and our brief taste of winter will be over.

Spring passes are about to go on sale for the Mt Ruapehu resorts of Turoa and Whakapapa. Usually, these represent an excellent deal, offering effectively a month of great skiing for not very much money, just as everywhere else down-under is closing. Conditions are typically uncrowded and the weather is usually more settled than in winter - generally offering excellent corn snow with occasional dumps of fresh snow after southerly blasts. The only drawback with this excellent prospect is that Mt Ruapehu is an active volcano and a few days ago it briefly burst into life. A "small" steam eruption covered the upper mountain in ash and moved boulders - one crushing the legs of a climber as it crashed into a mountain hut. Elsewhere on the mountain, a groomer was shocked to see a lahar (river of ice, water and debris) go by. The mountain accommodation was evacuated and the resorts took the precaution of closing for a day (just one day mind you). Apparently, its back to business as usual and skiing on Ruapehu is as safe (or as dangerous) as it was before. I can't blame them for wanting to reopen to soon because there was fresh high up and sunny weather too. Skiers have been asked not to venture above the upper boundaries of the resorts for the time being. Make the most of Friday and Saturday because strengthening westerly winds will arrive on Sunday bringing some new snow but a disturbed weather pattern into next week. There was also new snow last Monday/Tuesday at Mt Hutt, Broken River and Mt Ohau as well as at number of other resorts that had already closed for the season. The strong westerly airflow will also affect South Island resorts over the next seven days - Saturday looks especially windy - so expect very variable conditions. There will be some new snow about, but timing will be everything if you are to make the most of a brief ridge of high pressure mid-week before the westerly gets going once again

The ski season is nearly over in Australia. A thundery cold front is clearing away from the snowy Mountains on Thursday evening, associated with a deep low just south of Tasmania. Snow showers with snow to low levels follow behind this front but with strong to gale west or northwest winds. Sunday and Monday should see good skiing conditions, if a bit breezy, before it turns warmer on Tuesday. Wednesday should see the weather pattern we have right now pretty much repeating itself. Expect another thundery cold front and a return to cool temperatures and further snow showers.

The Three Valleys resorts of La Parva and El Colorado near Santiago in Chile have now closed for the season but Valle Nevado is still open and they are hosting a stage of the board FIS Wold Cup Boardercross competition until September 29th. Excellent spring skiing here and at any other resorts that are open - Termas de Chillan still reports a 3.8m base on its upper slopes so they won't be closing soon because of a lack of snow. The next seven days there should be fine and breezy everywhere with a dry westerly flow. No new is forecast except in the very far South - Cerro Castor is your best bet for fresh tracks - it currently has about a 1m base and will see a lot more cloud and bands of sleet and snow in the days ahead.