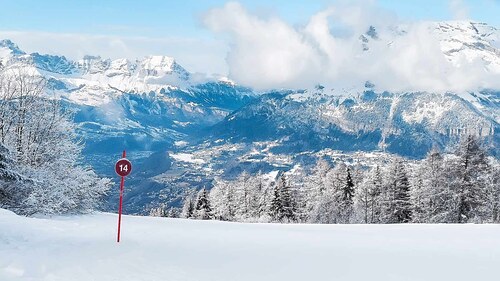 The Les Houches resort summary is: Les Houches has 18 lifts within its terrain that is suitable for beginner and intermediate levels, including terrain park enthusiasts. Find location, trail maps and piste maps covering the mountains 852m of vertical range and surrounding area. There are 22 trail at Les Houches.

The Les Houches resort summary is: Les Houches has 18 lifts within its terrain that is suitable for beginner and intermediate levels, including terrain park enthusiasts. Find location, trail maps and piste maps covering the mountains 852m of vertical range and surrounding area. There are 22 trail at Les Houches.

The terrain at Les Houches includes::

Les Houches is the home of the world famous Khandahar Verte des Houches Downhill ski run, hosting the Chamonix Valley leg of the World Cup circuit in early January of each year. Although a rather small resort, the 47 km of runs offer a good variety of alpine skiing sweeping down through woodland on the north-western slopes of Mont Blanc, the white dome of which tower's above the ski area. A number of race clubs use Les Houches as a training ground so, understandably, the standard of skiing is generally on the high side. Les Houches is also the winter training base for the British Ski Academy. Whilst not an area large enough to consider for an exclusive trip, unless specifically for training, it is well worth paying a visit if skiing in the Chamonix valley. For Intermediates and above, with the exception of race days, you can ski the Khandahar from the 1860m summit, back to the town centre at the resorts base, uninterrupted.

Les Houches is at last being managed by the Chamonix Lift Company and many changes are scheduled for next season (2012-2013) with new lifts and expanded pistes. In the meantime the two terrain parks have been closed. This gives more space for the resort's traditional use for race-training and instructor development courses.

Interactive Les Houches trail map and piste map. View the piste and trails as well as the surrounding terrain and mountain contours for backcountry action. Find and compare nearby resorts by clicking on the resort markers.

MarchAverage: 3.6 snow days per week
The snowiest week in Les Houches is week 1 of March. There are typically 3.6 snowy days during this week with 43 cm of snowfall. Check out the Les Houches Snow History graphs below.

As the Resort Manager for Les Houches (working without pay for the world renowned snow-forecast.com) you might expect me to be biased. Fear not, while I am certainly corruptible the sad fact is that I have received no offers at all. Therefore my own opinions remain utterly objective. I write as someone who loves this place, is not blind to its shortcomings, but choose to spend the whole winter here as well as some of the summer.
It's absolutely great, and I hope you come when the slopes are empty, the snow is in superb condition, and the weather perfect. But no promises; this is the mountains folks, and anything could happen.
But, if you see a lonely old bloke nursing a coffee and a pastry at the Jacquier patisserie under the Prarion lift, say hello and make my day. And read my resort news. Which is really a snow report in disguise.

[note from the ed: we do appreciate our RMs and all that they submit.]

Read 19 more reviews of Les Houches or submit your own