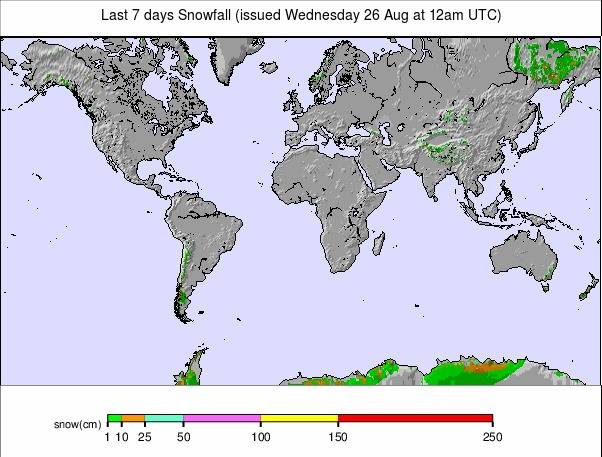 In southern Africa the season usually ends in the last week of August and that will be the case for Afriski, in Lesotho, after a nearly three-month season. Tiffindell, in South Africa, hasn’t been able to open due to the pandemic lockdown there.

2020 has been a winter like no other and there’s no sign that the final month will bring much change. A dozen or so ski areas in Argentina and Chile are now open but remain so only for locally-based skiers. It looks like that will remain the case now for the final month or so.

Australia, which has seen a sensational snowstorm this past week, has less than half its main centres open. Resorts in Victoria may be allowed to re-open from mid-September when the current lockdown is up for renewal, if it is eased, but Falls Creek and Mt Hotham have said they won’t reopen their ski lifts anyway even if it’s a yes. Mt Baw Baw and Mt Buller may still do so.

New Zealand’s ski areas are hoping that they’ll be able to ease back from ‘new normal’ to the ‘old normal’ (which they operated under for the first months of the season) for the final five or six weeks from the start of September. There are hopes that the Auckland outbreak has been ‘contained’ and that restrictions may be lifted. The Remarkables, only open at weekends this season and usually full by mid-morning anyway has had to restrict skier numbers and is filling up even earlier under the current Level 2 restrictions.

AUSTRALIA REPORT|   Australian ski areas have enjoyed one of their snowiest weeks of the winter so far as an Antarctic front brought a massive five-day snowstorm up from the south. Perhaps enjoyed isn’t the word for the majority closed by the pandemic but it was for those open, primarily Perisher (60/127cm / 24/51”) and Thredbo (35/127cm / 14/51”) in New South Wales. They each reported around 10cm (four inches) of snowfall on day one of the storm last Wednesday and a further 15cm (six inches) on Thursday last week (day two). Then a further few days of 10-20cm accumulations each day and by Sunday accumulations had reached 90-100cm (36-40 inches), at the more optimistic end of projections a week ago. This meant powder heaven. The snowfall took base depths in the country through the metre mark for the first time in 2020; good news for the final 6 weeks of the season. Perisher’s 75km of open slopes remains the largest area open in the world at present. Charlotte Pass posted the biggest snowfall total. The sunshine and blue skies returned on Monday bringing spectacular snow conditions to the slopes.

AUSTRALIA FORECAST| The sunny weather which returned on Monday should continue through much of the week in Australia with temperatures, initially as low as 10 degrees below freezing overnight, gradually climbing by Friday to well into positive temperatures during the day. It’s looking like the next band of snowfall should roll in by the weekend though turning things wintery once more as we near the start of September.

NEW ZEALAND REPORT| It has been a roller-coaster week for weather in New Zealand with ski resorts reporting everything from wet snow to ‘powder’, dry clear days to fog. Basically pretty much every option imaginable. Some centres were forced to close either part of their ski areas or sometimes the entire mountain on some days when they got more of the bad stuff. Turoa (40/130cm / 16/52”) began the week with blizzard conditions which means plenty of fresh snow. Mt Hutt (38/154cm / 15/62″) also reported a big snowfall to start the week; however, Temple Basin, by contrast, still has not had enough snow to open for the season yet and may be the only Southern Hemisphere ski area not to have opened because of the traditional problem some resorts face each winter, not enough snow rather than the main reason this year, the virus.

NEW ZEALAND FORECAST| It’s looking like one of the most promising spells for skiers this season in the final week of New Zealand’s winter. Temperatures are set to remain sub-zero (generally 5-10 degrees below) all week and regular snow showers are forecast through the next seven days right across the country, interspersed with dry sunny days in which to hopefully enjoy the ‘powder’. Seven-day snowfall totals could be as much as 60cm (two feet) by the start of September next week.

ARGENTINA REPORT| There’s been fresh snow for those lucky enough to live near Argentina’s half-dozen ski areas that are either open weekends or, in the case of a few of the larger centres, every day for people living nearby. Cerro Castor, in the south, posted video of powder skiing a the weekend after around 20cm (8 inches) of snow fell there. Cerro Catedral (90/235cm / 36/94”) continues to post the deepest snow of an open area on the continent and indeed the Southern Hemisphere. The area also has the most runs open in South America at present, 30km (19 miles).

ARGENTINA FORECAST|  It’s looking like a snowy final week of August in the Argentinian Andes with most resorts forecast to see heavy snowfall most days over the coming week, perhaps just seeing a break in the cloud on Friday. Temperatures should stay around freezing or a degree or two below. Accumulations of 60-80cm (24-32”) are possible at the start of September next week.

CHILE REPORT| We’re into the second week of some ski areas in Chile being able to open, to locally-based skiers holding season passes only, and so far we’re aware of two centres which have chosen to do so. El Colorado (30/80cm / 12/32”) and La Parva (30/80cm / 12/32”), both have around half of their terrain open (10-20km / 6-13 miles) and are limiting opening hours/days. So far it’s unclear if any areas in the country are able to or intend to join them with the normal season-opening dates running low. Some, however, report they have much more snow lying than reported by El Colorado and La Parva so say they could stay open until November if they re-open. In the meantime, El Colorado and La Parva report great conditions with some fresh snow and temperatures around freezing point.

CHILE FORECAST| Quite a mixed week ahead for weather conditions around ski areas in Chile, with something of everything. It should remain consistently cold for the final week of winter with temperatures of minus 5 to minus 15 the norm. Other than that we’re likely to see snowy and sunny days alternating through the week ahead with the chance of 20-30cm (8-12 inches) of fresh snowfall in total to start spring next week.

SOUTHERN AFRICA REPORT| The end of the 2020 season is nigh in southern Africa and it looks like South Africa will become the first country no to have a ski season this year as the country’s sole ski area, Tiffindell, has sadly been unable to open due to the pandemic lockdown. The region’s other ski area, Afriski, is reaching the end of its three-month season; this Sunday August 30th being closing day. Afriski posted some fairly low temperatures in the first half of last week, hitting 15 below-freezing at one point.

SOUTHERN AFRICA FORECAST| Little change on the usual forecast for the region as we reach the end of southern Africa’s season. Plenty of sunshine and temperatures around freezing for most of the time, just climbing a few degrees above.

NORTH AMERICA REPORT|  North America’s start-stop-start 2019-20 season is finally nearing its end and a little sooner than expected. Timberline (0/36” / 0/90cm) has announced it is closing eight days earlier than planned and won’t making it through to the Labor Day long holiday weekend to Monday 7th September, as planned. It’s no real surprise with the extreme heat that’s been experienced in the Western US over the past few weeks and months. Death Valley, to the south, recently posted the world’s hottest recorded temperature yet. So this Sunday, August 30th is the new closing day. So that’s it for the North American ski season, 10 months after the season started in Arapahoe Basin at the end of October last year. Resorts did stay open almost through the pandemic with the last to close up in Western Canada, staying open into April. Then the first to re-open in California doing so a few weeks later at the end of that month. It’s not likely to be long until the first ski areas in North America start to open for winter 20-21 though. The first snowfalls have already been reported up high and snow-making is likely to begin within a month in Colorado with a view to the first area openings in October.

NORTH AMERICA FORECAST| It’s looking mostly sunny yet again for the final days of the season in Oregon. Temperatures shouldn’t have been as hot as they have been though, more like 5-15 degrees above freezing, five to ten degrees lower than they had been.

The same seven areas remain open in Austria, France, Italy, Norway and Switzerland as last week but we’ll round off August with the number dropping to six in four countries with summer-skiing due to end in France on Sunday. Then it will be a fortnight until the numbers open starting to grow once more as we begin the run into winter 2020-21.

ALPS REPORT|  It has been a largely clear and sunny week in the Alps after the snowfall reported on Austrian glaciers earlier last week. The Kitzseinhorn, due to re-open at the start of October, was the latest to post pictures of fresh August snowfall, for the second time this month, up at the top of the glacier. Since then it has turned warmer and been largely sunny, although not always, with some more periods of rain and light snowfall at times. Fog has also been a factor at times, although that’s been more down in the valley than up on the slopes.

We dropped to five glaciers in mid-August and will end August at four open with Les 2 Alpes (0/120cm / 0/48”) due to end its summer ski season this coming weekend. 2020 will go down as one of the better summers in recent years for snow-cover. More often than not, in the last few years, the glacier has had to close early but it looks like this year it will make it thanks to great snow cover back at the start in June.

ALPS FORECAST|  There another week of mixed weather ahead with temperatures fluctuating around freeing-point up above 3,000 metres, sometimes a few degrees below but others climbing to four or six degrees above. The forecast has a bit of everything, again, with dry weather for most on Wednesday and Thursday but some rain and more snow possible up high as we move into the weekend.

SCANDINAVIA REPORT| Norway’s Fonna (300/400cm / 120/160”) and Galdhopiggen (20/90cm / 8/32”) remain open with mixed conditions. It has been mostly sunshine again this week but not every day. Fonna’s lift was closed on Saturday due to thunderstorms.

SCANDINAVIA FORECAST|There are definitely colder conditions ahead with temperatures yo-yoing between 7 or 8 degrees below freezing and 7 or 8 degrees above during the final week of meteorological summertime. The next few days will be sunny but then things are set to become unsettled for the end of the week with a good chance of snow showers from Thursday to Saturday.

There are no known ski areas operating lifts for skiing in Asia at present, except within indoor snow centres