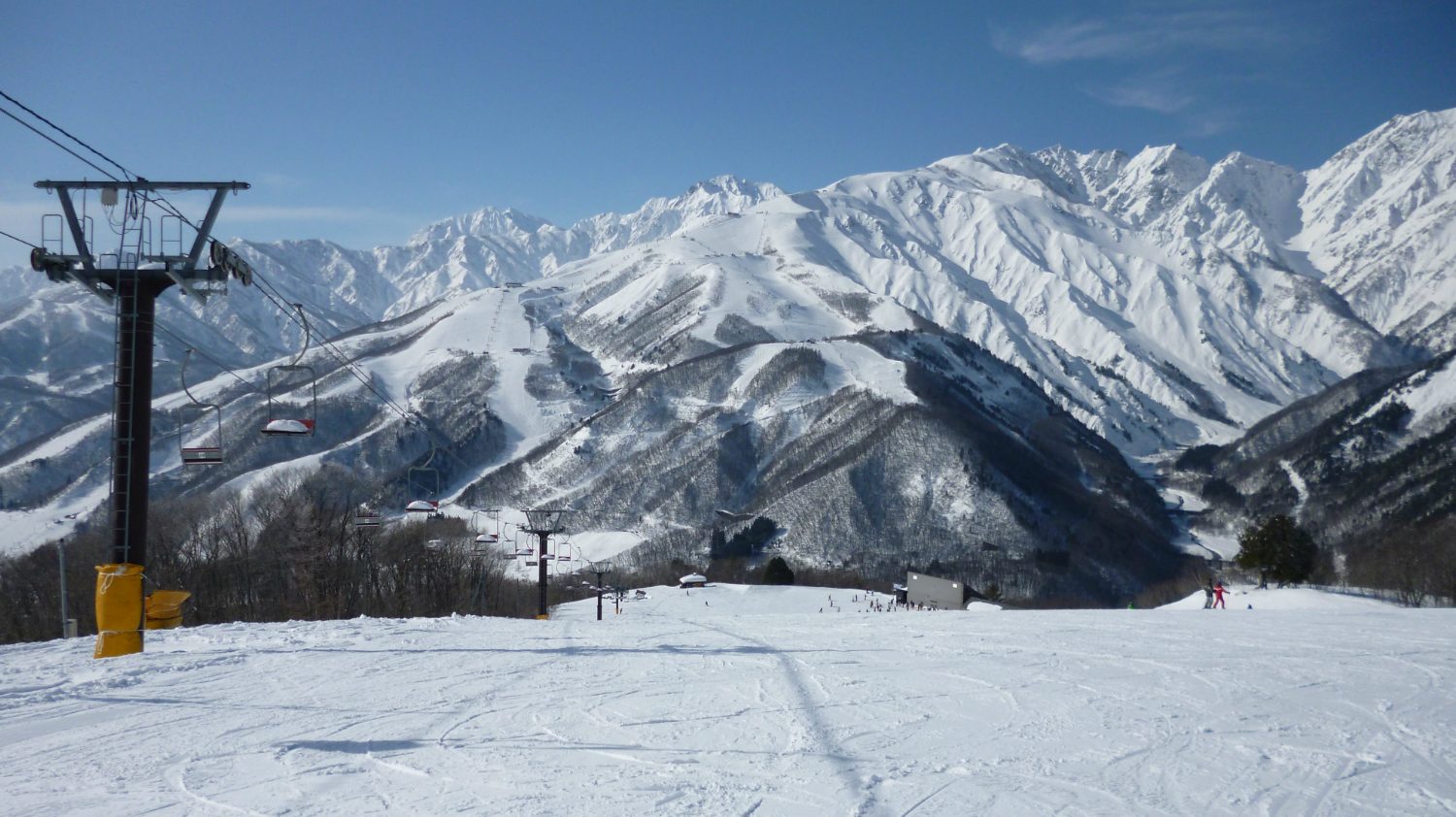 Last time I talked about Hokkaido, the northern island of Japan.

This time we travel south to Nagano Prefecture, a landlocked and mountainous prefecture located in the central region of the main island of Honshu. Nagano Prefecture is to the north-west of Tokyo and to the northeast of Osaka and the Kansai region, making it a popular destination for people from both those hugely populated regions. (The ski resorts, excellent terrain and snow helps!)

Nagano Prefecture is home to most of the Kita (Northern) Alps, Chuo (Central) Alps and the Minami (Southern) Alps, which extend into the neighbouring prefectures.

Nagano has always been extremely popular with Japanese skiers and it has the second largest number of ski resorts in Japan – there’s over 80 of them in total! While there are some very small local ski hills, like in Hokkaido, there are also a larger number of bigger scale ski resorts and some of the ‘big names’. Traditionally popular ski resorts in Nagano include the resorts in the Hakuba region, Shiga Kogen, Nozawa Onsen, Sugadaira,… amongst others.

The prefecture earned a much higher international profile from 1998 when it hosted the Winter Olympics and since then big strides have been made in becoming an internationally known ski destination. In particular, destinations like Hakuba, Nozawa Onsen and Madarao are doing a really good job in building awareness and a reputation with riders from outside Japan. 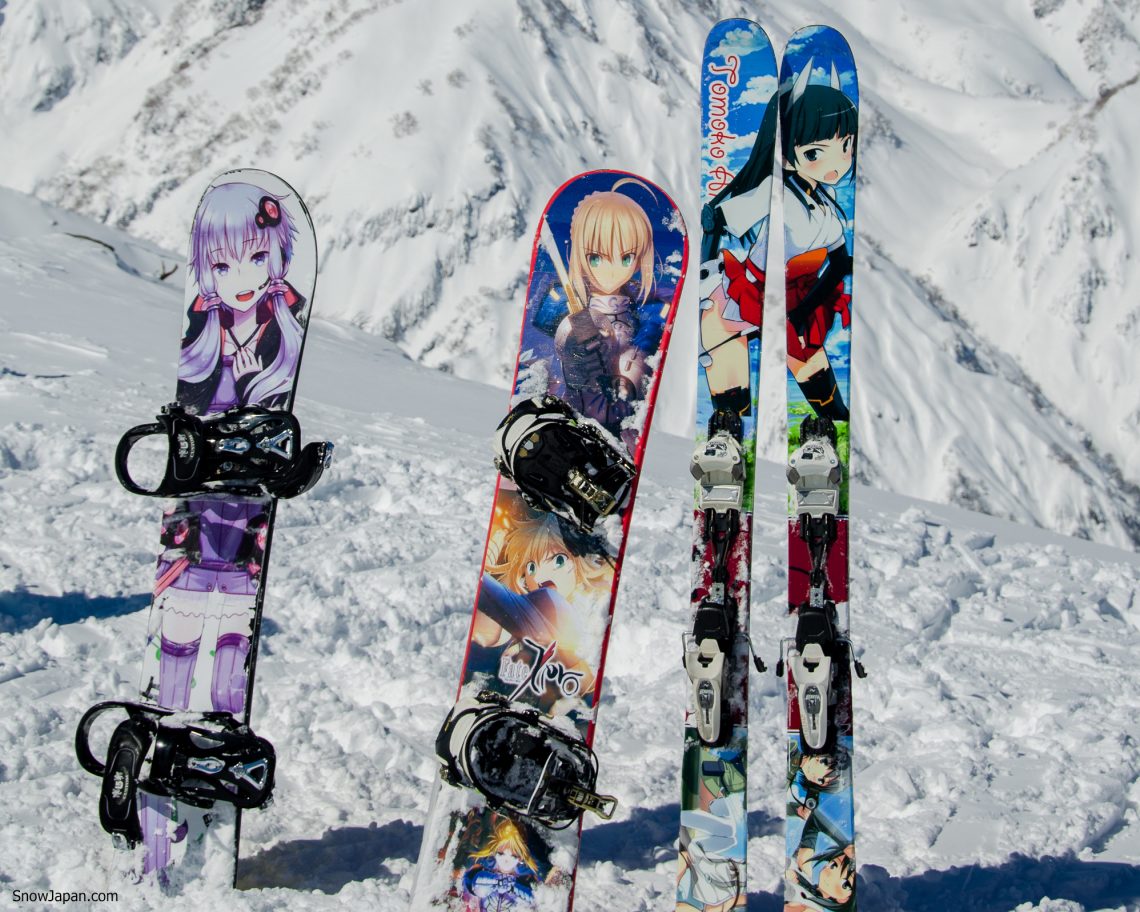 This time I’ll take a bit of a look at ‘Hakuba’.

First of all, what exactly is ‘Hakuba’?

Hakuba is actually the name of a village in the north-western region of Nagano Prefecture and it is about a one-hour drive from central Nagano city. To the north of Hakuba village is Otari village and to the south is Omachi city and there are 10 individual ski resorts within that region, many of them using the word Hakuba in their official names. In recent years most of those ski resorts have got together and become collectively known and marketed as ‘Hakuba Valley’. From north to south, those ski resorts are:

The Hakuba Cortina and Hakuba Norikura resorts and the Hakuba Goryu and Hakuba 47 resorts are lift and course connected, while the others are individual stand-alone resorts. A ‘Hakuba Valley Ticket’ now allows you to ski at any of them though and a shuttle bus service takes people between the resorts. Most people choose one of the ski resorts and stay there for the day and perhaps check out a different resort on another day.

It’s not the place to review the individual ski resorts but suffice to say that there is a wide range of terrain choice on offer in the ‘Hakuba Valley’, from gentle wide slopes great for beginners to huge mogul runs, steeper runs, ungroomed powder and official tree zones. There is definitely enough choice to spend a whole holiday in just that area.

Although the Hakuba valley is geographically compact there is a huge climatic gradient as you travel towards Cortina at the western end. Snowfalls are deeper, snow falls more often and the sun shines less at this end of the valley.

That’s because it is closest to the Sea of Japan and icy winds blowing from Siberia across its relatively warm water is what causes the the incredible deep and powdery snow that Japan is so famous for. This is the greatest example of what meteorologists term Lake-Effect snow on the planet. The name derives from the Great Lakes of North America and although the Great Lakes are geographically impressive they are very modest compared to the Sea of Japan and the other big difference is that in Japan these snow-bearing clouds slam straight into a major mountain range. Overnight snowfalls of 20-50cm are the norm in January at the north end of the Hakuba Valley.

Temperatures here are almost always 5-10C warmer here than in Hokkaido but on the colder days of January and February you can find Hokkaido quality powder here. The best of it, or at least the deepest of it,  is almost always at the Cortina end of the valley so if you are staying at the south end of the valley and you see a few cms of fresh and crave deep off-piste action,  travel a few kms north and your efforts will be rewarded. That’s not to say places like Goryu don’t get reliable big snowfalls, compared to anywhere in the European Alps they certainly do, just not as reliably as the northern end of the valley where most winter days seem to begin with digging out your vehicle, assuming you can find it.

The downside of all that Hakuba cloud and snow is that clear views like the one below are the exception rather than the rule and its pretty common to go a week or two in January without having a single bluebird day. Thankfully, tree skiing is exceptionally good and there is enormous potential for back and slack-country but the general advice is the same here as anywhere else: hire a guide, and there are several to choose from, seemingly with more companies offering guiding every season. Most of the guides are from Australia, New Zealand and North America and they know the snowpack, know the safest aspects and the aspects where the snow quality is best: remember, Japan is at a low latitude and even in early February sunshine will turn powder into crud and sun-crust on some aspects leaving other slopes unharmed.  If tree-skiing is not your thing, there is ample night-skiing available and the low angle of artificial light makes for much better visibility than the flat light of a snowy day.

If you do get lucky enough to see the majestic vista of the Nippon Alps soaring over 3000m west of the resorts you may be struck by the fact that there are few or no tracks far above the treeline.  That’s mainly because snowfalls combine with wind-loading on the exposed slopes to make the high Alpine region very avalanche prone: only suitable for exploring very early in the season before the snow gets to any depth, and then when the first snows fall and then for a longer period of a few weeks in spring when the snow-pack becomes stable sugary snow. It’s also because it’s a serious undertaking to boot-pack or tour to those places in very short weather windows. 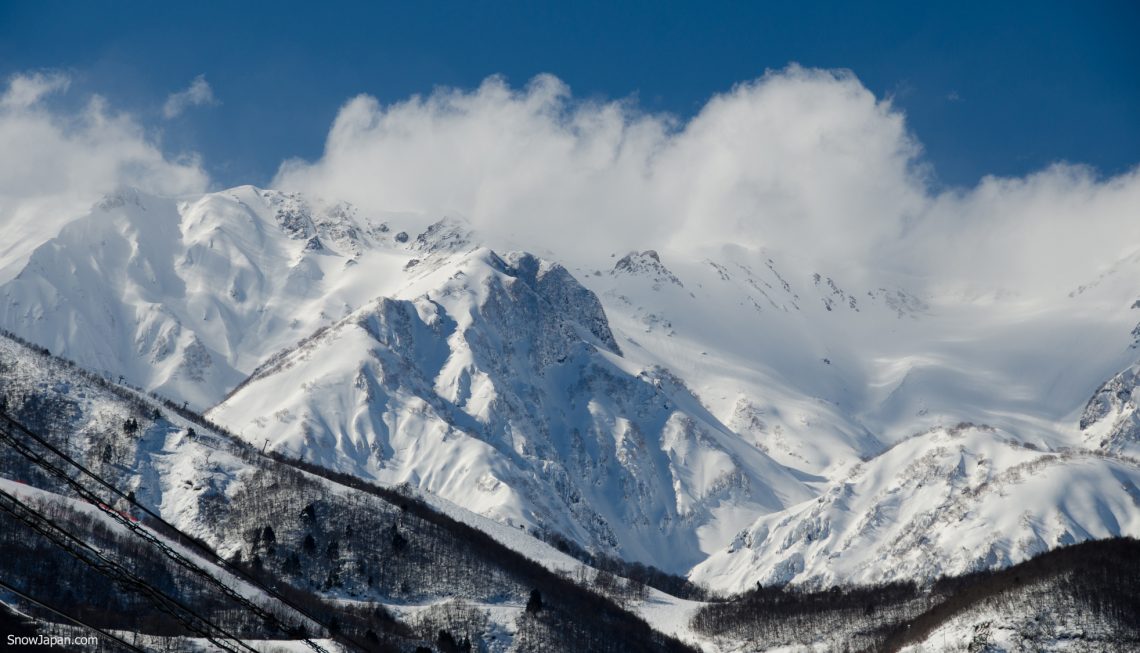 If you are into checking out Olympic venues, the central Hakuba Happo-one resort was host to the alpine skiing events; the ski jumping was also held at the ski jump by the base of that resort, and the cross-country skiing took place at Snow Harp in the southern part of Hakuba village.

In recent years there has been a real increase in the number people from all over the world visiting Hakuba and it is quickly becoming more ‘international’. Not quite to the extent of Niseko just yet, but I think it’s fair to say that Hakuba is probably the second most well-known Japanese ski destination with international visitors. Japan isn’t known for a lively apres-ski, but that aspect of the experience has also had a noticeable improvement in Hakuba with the growth in international visitors. So far, Happo-one is without question the most developed, plushest, most westernised, of the resort areas whereas the Japanese locals resort of Tsugaike Kogen is charmingly ramshackle and because the Japanese tend to be weekend skiers. midweek tends to be much quieter at Tsugaike

Next time I’ll take a look at some of the other popular ski resorts in Nagano that are quickly getting a lot of attention from overseas skiers and snowboarders.

During the Nagano Olympics, the biathlon was held at Nozawa Onsen. Shiga Kogen was host to alpine skiing (Higashidate for the giant slalom and Yakebitaiyama for the slalom and snowboarding giant slalom). Other events were held in Nagano city, Karuizawa, Iizuna and Yamanouchi. 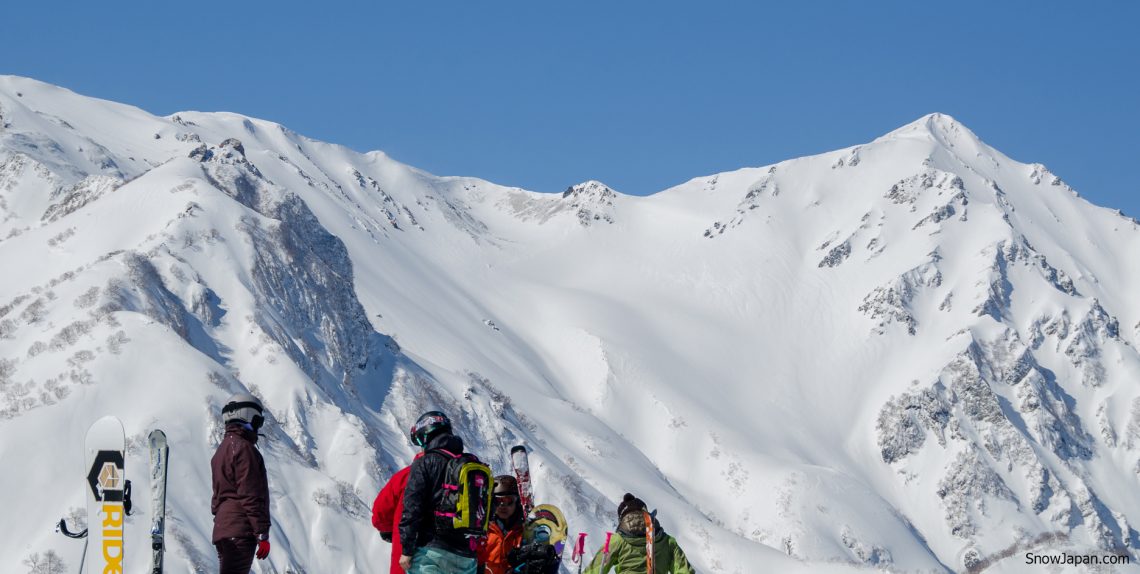