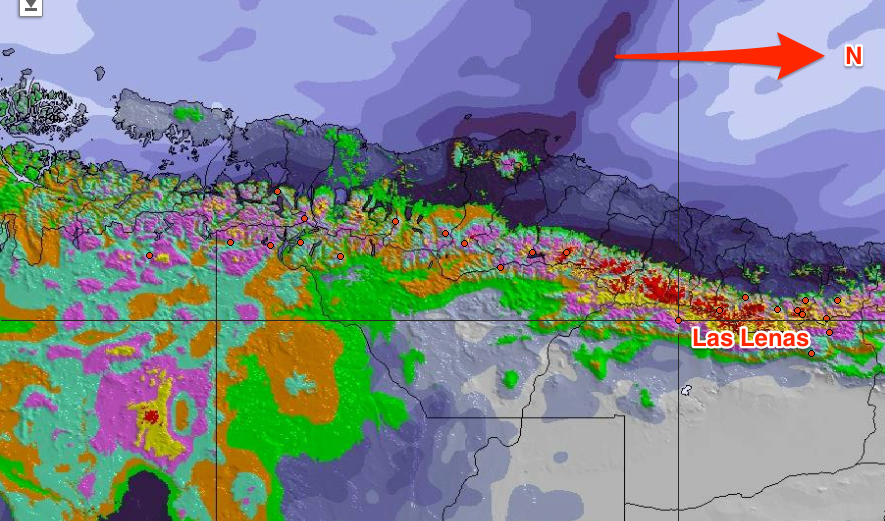 A major winter storm is heading the Andes mountains. The Argentinean Meteorology Service (SMN) has issued a series of alerts for all the range, from Tierra del Fuego to Mendoza: heavy, persistent snowfalls and intense winds are the most significant ones. Current snow conditions, forecasts and pictures for some of the most important resorts in Argentina and Chile.

Las Leñas is currently with very little snow, except for the base area, which is covered with artificial snow. However, it will be one of the most benefited resorts after the snowfall: 1 meter (40”) of fresh is forecasted for mid-mountain. Yesterday, Las Leñas Ski Resort announced that they are going to open -as scheduled- this Saturday, June 17th. However, only Venus and Eros slopes will be open. If the storm is big enough, they will continue openings gradually, after grooming and making avy control.

The three resorts are having a glorious season, with a lot of snow and early opening. They have been fully operating since the end of May, and conditions are still great. These lucky resorts will receive more than a meter of new snow, to keep their season rolling. Also, a second snowfall is forecasted for the end of next week. However, it is still too early to make any conclusions.

The original opening date for both ski resorts -Cerro Catedral and Chapelco- was this Saturday, June 17th. However, lack of snow made it impossible for them to open this weekend. Expected snowfall is about 80 centimetres (31”) during the next days. If so, they will probably open next weekend if conditions improve.

Last year, Cerro Castor experienced its worst season ever. This one, apparently, won’t be as bad. The resort located next to the southern city of Ushuaia has been receiving lots of snow, especially over the last couple of days. Additionally, snow is forecasted for this week, starting today.

Scheduled open for Nevados de Chillan is June 22nd. The Chilean resort saw snow during the last weeks, and much more is on its way: not only one but two storms are forecasted for the area. These storms will not only affect Nevados, but also other resorts such as Corralco, Pucon and Las Araucarias, all of them located in the Southern Andes.

Snow forecasts for all South American resorts can be found at www.snow-forecast.com. For extended forecasts and some amazing features, a 12-month recurring premium pass can be purchased for only £GBP 21.99. Also, snow maps are available for all the resorts along the Andes range.