This snow report has been created by snow-forecast.com
Popular Luosto Pages 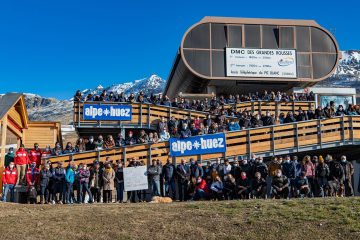 Ski resorts in France and Italy have become increasingly vocal in their campaign to block plans by the French, German and Italian governments to close ski areas into January. The resorts argue they have adequate measures in place to operate safely in the pandemic and say the damage the closures will cause livelihoods is disproportionate to the risk. “We ask the Government to come to its senses and listen to the mountain professionals who have shown their professionalism in the management of the health crisis,” a statement from Alpe d’Huez today says. A Facebook post by the resort received over two-and-a-half thousand likes and nearly 2000 shares within an hour of it going live. Larger protests are reported to be

We visited Luosto in Jan 2006. The main purpose of the visit was to get married!
The skiing was limited to only a handful of slopes. The lifts are archaic compared to the Alps/Dolomites and it was very, very cold (down to -33).
However, the snow conditions were superb, with light, dry snow covering a good base. The slopes were virtually empty as well, meaning no queues. The locals invariably spoke good English and were incredibly friendly,
Apart from skiing, there is a variety of activities to keep you occupied. We went on reindeer sleighs, husky sledding, snow shoeing, snow mobiling, visited an Ice Castle and went on an Ice Breaker in the Baltic. During the week we were there, we could see the Aurora for 3 nights.
Accommodation was in log cabins in amongst the trees. Each cabin had a log fire and a sauna.
Living costs out there aren't cheap, but not too expensive, especially compared to major European resorts. Ski passes and hire were inexpensive.
Would we go again? Definitely.
Don't go for a skiing holiday - it's too limited. However, for a winter holiday above the Arctic Circle with some skiing thrown in, it can't be beat.

Read 2 more reviews of Luosto or submit your own

The Luosto skiing weather widget is available to embed on external websites free of charge. It provides a daily summary of our Luosto snow forecast and current weather conditions. Simply go to the feed configuration page and follow the 3 simple steps to grab the custom html code snippet and paste it into your own site. You can choose the snow forecast elevation (summit, mid-mountain or bottom lift) and metric/imperial units for the snow forecast feed to suit your own website…. Click here to get the code.