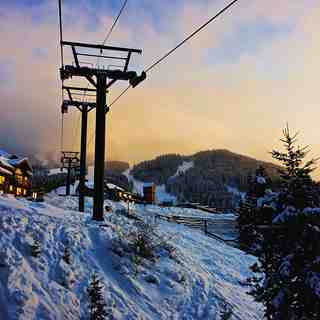 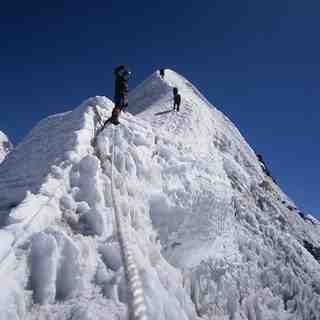 FORGET the rain in Spain; sunshine in a cloudless azure sky is the backdrop as you career down the empty pistes of the Spanish Pyrenees. Get to Barcelona and you'll be in easy reach of over a dozen ski stations. You could even hop over to France or Andorra.

When planning an independent ski trip the great unknown is how to get there. Often you can't even find the resort on the map. Are you even looking at the right country? Not speaking the lingo is a stumbling block and phoning up the tourist office is daunting. If you do not want to snow-chain your way up slippery mountainsides in a rented smartcar how can you reach your dream slope in one piece? With a bit of persistence it is surprisingly easy. You could decide to drive from home to the slopes - just drive until you see the snow-capped peaks beckoning.

For the rest of us a good start is looking at which Pyrenees resorts the big ski companies go to and copycat their arrangements. There are always buses from airports to resorts. A do-it-yourself package will usually work out cheaper than the travel agent's deal, particularly if you travel mid-week. Major ski companies go to the French Pyrenees and Andorra with flights to Girona, Barcelona, Montpellier and Perpignan. Andorra is the great white hope for snowboarder party fiends with Pas de la Casa the place to booze on a budget in salopettes. If you're looking for something a bit different, fly to the same airport but travel less. Stop short of Andorra's drunken duty free lure, ski in Spain and include a city stopover in Barcelona.

With Spain an oft overlooked skiing destination, let's start with the poshest of the lot, where the King graces the slopes. The Spanish equivalent to our Royals' top-notch St Moritz, is Baqueira Beret. A day pass in the most famous Spanish resort will set you back just over £20.

If you prefer pretty to posh then according to locals Vall de Naria is the most beautiful, yet tiny Spanish ski station. It is as picturesque as it is fake, that is, it is usually packed with snow-cannon crumbly snow rather than the real white stuff. The resort's redeeming feature is the unusual approach, reached by El Cremallera - an ancient transport unique in the world - a snow train or rack railway that makes its ascent through a pine-clad forest. The journey from the city to El Crem is less endearing, by way of a notoriously slow train stopping in every one-donkey-town (this animal is the Catalonian symbol - often spotted defiantly humping the Spanish bull on bumper stickers). Not an ideal quick break from Barna but if you've enough time to meander this pretty-as-a-postcard resort is certainly worth a peek and is perfect for beginners. Nestled on the southern slopes of the western Pyrenees, it is encircled by imposing 3,000 feet crests and peaks of the Ribes Valley. Specially discounted fares from main train station Barcelona Sants combine rail travel with a ski pass.

If Barcelona is your base then you could also take the bus. From Sants hop on a Eurolines coach. Eurolines sell getaways, which include budget hotel accommodation to Andorra as well to Spanish resorts, perfect for a city - ski combo.

If you are in the city get a taxi for the early morning start. Don't forget to grab some hot chocolate and churros from the all-night stall, as it's colder than the moon waiting for the bus. Wear your ski gear, there's no waiting room open so early.

Essentially the backpackers' bus, it is for travellers who shun the more wealthy interrailers and take to the roads, so be prepared. Of course it is great, cheap, the buses do have seats, but in return it takes... a while. Take a cask of wine and then sleep through any excess partying of puking students more into après than ski.
To snub the backpackers and hang tough with the locals then nip into any Catalonia travel agency where most offer weekend deals. It is entirely possible to slope off for a £100 weekend including ski pass, transport and accommodation. If an all-inclusive is more your style then another £50 should do it. Of course, this is dependent on travel agent, availability, weather, and a thousand other factors more than likely to change at the drop of a hat or the fall of a decent dump of snow. But they were there in this year's peak season when the snow was good so they will be there again. The snow is always good somewhere, and if you turn up in Barcelona you are on the spot to follow the snow.
La Molina is the closest resort to the big city with a skiable area of over 50km. Set your alarm for an obscenely dark hour and catch the early train and you could be shimmying your way down the shalom well before brunch.

French resort Ax-Les-Thermes is reached through a dramatic mountain-tunnel, where you emerge in France like an exuberant ski-bunny having burrowed your way over the border. When I went the snow here was perfect, the sunshine glaringly in-your-face and the croissants buttery. Once you negotiate the first bottle-neck cable car you are suddenly faced with a mountain opened up, coated with moguls on one side to smooth and exhilarating steep slopes on the other, enough to give you a head rush just from looking at them. You'll spend your time there with the wind on your back and the sun on your face.
The best thing about many of these resorts is that they are crowd-free and stress-free. Once you get to the mountain there's only a few minutes between you and a clear run. More importantly it will be a run where irritating two year-olds with flailing arms and ski helmets won't zip past within an inch of your skis at the speed of sound. The only incident of ski rage likely in Spain would be if your sandwich were a little late in arriving. For the mountain top cafes are often busier than the pistes.

Did someone mention queues? Not in Boí Taüll, just three-hours from Barcelona. Here the lifts were neither as plush nor as rapid as some of their Alpine counterparts - but there were no close encounters with the rocks, so who cares? If it's a trade off between swifter padded lifts coupled with the frantic and impatient elbowing which accompanies the lift queues then I'll take sitting on a chair for slightly longer, please. This resort is really a no-frills skiing experience, with few restaurants and just one hire shop. Yet with few other skiers you could experience the sort of run you see in the films, where you only hear your skis crunching, see only your powder flying up as you turn and with no one to avoid on the way down, you don't even need to turn. Boí Taüll offered runs which were crisp and clean. The winds at the top of the mountain take your nose off, and the high-octane descent feels like the edge of the world.

So leave the ski snobs in the Alps, exchange gluwein for heart-warming hot chocolate and head for the Pyrenees.