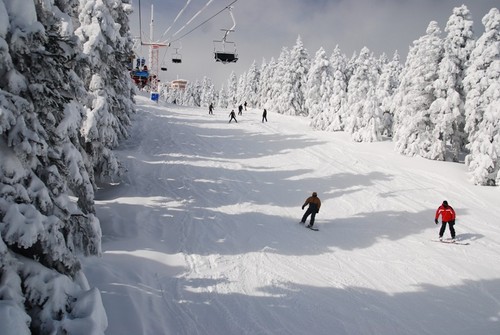 The Uludağ resort guide summary is: Uludağ has 22 lifts within its terrain that is suitable for all levels, including terrain park enthusiasts. Find location, trail maps and piste maps covering the mountains 555m of vertical range and surrounding area. There are 26 trail at Uludağ.

The Uludağ resort guide summary is: Uludağ has 22 lifts within its terrain that is suitable for all levels, including terrain park enthusiasts. Find location, trail maps and piste maps covering the mountains 555m of vertical range and surrounding area. There are 26 trail at Uludağ.

Helpful resort information to assist planning your trip to Uludağ.

The terrain at Uludağ includes:

Uludağ is the fabled Mount Olympus of Mysia. It is known in mythology as the place where the gods watched the Trojan war. It is a western extension of the Pontic mountain ranges. Its name means 'Big mountain' - the highest mountain in Western Anatolia, culminating at Kara Tepe (2543m). The ski centre, in the Uludağ National Park, is 36km south of Bursa (a city of 600,000 people) accessible, either along a sealed road, or else by a combined cable-car/bus route that may be preferable when the road is icy. The skiing at Uludağ is mostly intermediate on lightly forested slopes that are usually open from December until late March. Heli-skiing is also available and there are vast off-piste bowls to explore, albeit a threat to conservation within the national park. There are 27 hotels, 15 of which are privately owned, providing over 3000 beds at present. Further development is underway.

Latest photos from Uludağ. View all photos at the Uludağ gallery page.

Interactive Uludağ trail map and piste map. View the piste and trails as well as the surrounding terrain and mountain contours for backcountry action. Find and compare nearby resorts by clicking on the resort markers.

FebruaryAverage: 3.4 snow days per week
The snowiest week in Uludağ is week 3 of February. There are typically 3.4 snowy days during this week with 35 cm of snowfall. Check out the Uludağ Snow History graphs below.

A summary of the current snow conditions in Uludağ. View more information on the Uludağ detailed snow report page.

I would like to say regarding the Bof Hotel Uludag, in Turkey, which is dam sophisticated delighted enormous hotel. Especially
Miss. Dhouha, her hospitality is outstanding mind blowing. Her
way of communication, nature and hospitality are very, very
good. She gives very good fantastic service. I’m so delighted to say that she is really nice.

Read 48 more reviews of Uludağ or submit your own

Discover ski resorts near Uludağ. Click below to view there ski resort guides.