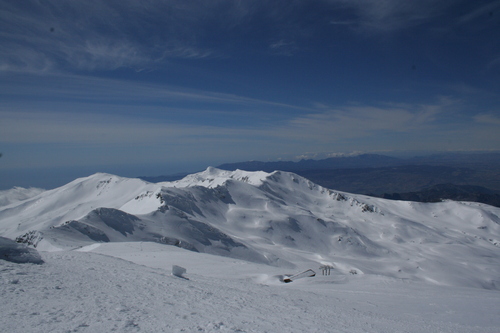 The Sierra Nevada resort summary is: Sierra Nevada has 17 lifts within its terrain that is suitable for beginner and intermediate levels, including terrain park enthusiasts. Find location, trail maps and piste maps covering the mountains 1198m of vertical range and surrounding area. There are 124 trail at Sierra Nevada.

The Sierra Nevada resort summary is: Sierra Nevada has 17 lifts within its terrain that is suitable for beginner and intermediate levels, including terrain park enthusiasts. Find location, trail maps and piste maps covering the mountains 1198m of vertical range and surrounding area. There are 124 trail at Sierra Nevada.

The terrain at Sierra Nevada includes::

There are few places in the world where you can ski in the morning then head to the coast for a swim in the afternoon, but the proximity of Sierra Nevada to the Med allows this. Don't be fooled into thinking that the skiing will be second rate either. 21 lifts serve 110 km of piste at the Sierra Nevada but it can get busy at the weekends with bottlenecks at the lifts. The pistes lend themselves to the intermediate but there is ample off-piste skiing for the advanced riders. Off the pistes, there are some good restaurants and lively bars. If you get bored or the snow is not as good in the Sierra Nevada, just head for a beach! A halfpipe was added to the snowpark Sulayr in 2011 (165m long and 6m high). It is the biggest in Spain. The snow junior world championship was celebrated in this park. It is the longest Slopestyle line in Europe with over 77 different obstacles and up 46 possible in any one run!

Interactive Sierra Nevada trail map and piste map. View the piste and trails as well as the surrounding terrain and mountain contours for backcountry action. Find and compare nearby resorts by clicking on the resort markers.

MarchAverage: 2.7 snow days per week
The snowiest week in Sierra Nevada is week 1 of March. There are typically 2.7 snowy days during this week with 25 cm of snowfall. Check out the Sierra Nevada Snow History graphs below.

For Spain, this resort has the best snowsure (personal opinion). But for Europe, not so much. That doesn't change much for me, though. Even though it doesn't always snow a whole lot (due to the drier climate of Spain), when it does snow, it tends to stick around for a good bit. But if they are having a snow troubled year, they have a fleet of snowmaking guns to save the day. Its biggest problem (personal opinion) is its lifts. Its lifts tend to be slightly in the slower end of things, and the queues can get very backed up. The staff at Sierra are mostly nice. That's a big mostly, though. When I visited Sierra, I met a few staff who didn't seem happy. One was complaining about how long she has been at work 15 minutes after her shift started. But none the less, if you are visiting, beware, sometimes the resort suddenly closes early in the morning. So if you are traveling hours to get to Sierra, make sure to have a backup plan just in case. But if you are a local, it is a perfect resort.

Read 81 more reviews of Sierra Nevada or submit your own