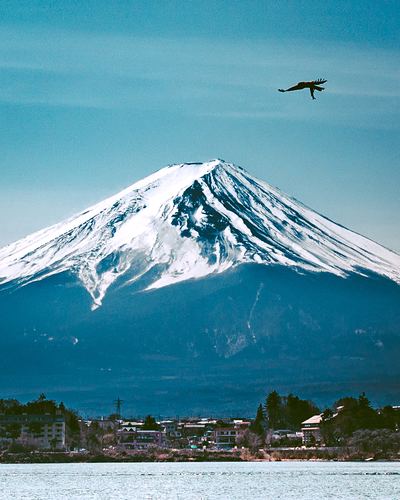 The Mount Fuji summary is: Mount Fuji has 0 lifts within its terrain that is suitable for intermediate level. Find location, trail maps and piste maps covering the mountains 1524m of vertical range and surrounding area.

The Mount Fuji summary is: Mount Fuji has 0 lifts within its terrain that is suitable for intermediate level. Find location, trail maps and piste maps covering the mountains 1524m of vertical range and surrounding area.

The terrain at Mount Fuji includes::

Fuji-san or Mount Fuji is the highest mountain in Japan at 12,389 feet (3,776 metres). It is an isolated volcano, located only 50 miles southwest from Tokyo, which contributes to its popularity. Thousands of climbers, tourists, and religious pilgrims ascend to the summit of Mount Fuji each year. The mountain has traditionally been sacred to the Shinto religion, and has remained sacred to Buddhists as Buddhism has become Japan's predominant religion. Three temples (plus a weather observatory) have been erected on the summit. No record exists of the first ascent of Fuji-san, but oral tradition states that a Buddhist monk first climbed the mountain in the seventh century. The mountain is now dormant, but it has erupted eighteen times in recorded history, and many more times according to geological evidence. The last eruption of Mount Fuji occurred in 1708. Perhaps, ironically for a sacred mountain, the foothills have been developed as a summer and winter sports area, and skiing on the mountain is popular in the winter. The majority of people who climb the mountain, however, do so with respect for its sanctity, and quiet meditation is common on its summit. The official climbing season for Fuji-san or Mount Fuji is July and August, but many climb in surrounding months to avoid the crowds.

Interactive Mount Fuji trail map and piste map. View the piste and trails as well as the surrounding terrain and mountain contours for backcountry action. Find and compare nearby resorts by clicking on the resort markers.

MarchAverage: 3.5 snow days per week
The snowiest week in Mount Fuji is week 1 of March. There are typically 3.5 snowy days during this week with 33 cm of snowfall. Check out the Mount Fuji Snow History graphs below.

Since discovering this site, I always check the weather forecast on the summit before going to Mt. Fuji.

I have been to the summit 25 times now. The forecast, on this site, is generally very accurate but the weather on Fuji is changeable and on my last trip (August 15) the forecast was for a clear night sky, mild temperatures and all good for a sunrise. Things took a turn around 01:00 around 3200m with heavy rain and very strong winds. The rain stopped around 05:00 but the winds remained moderately strong until at least 07:00 by which time I was heading back down from the summit.

Most important thing is to be prepared just in case there is a change in the weather. Some extra layers and waterproofs, even when the forecast is good, are definitely a must.

Mt. Fuji is great. I have this site bookmarked and I'm often checking the forecast a week ahead if I get that feeling I need to go to again.

Read 6 more reviews of Mount Fuji or submit your own